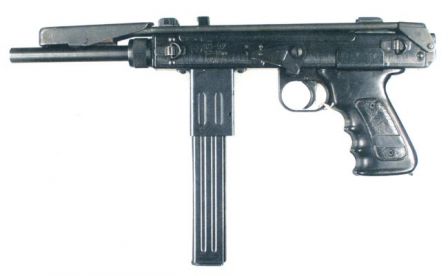 The K6-92 submachine gun was developed during early 1990s in the republic of Armenia, which gained its independence in 1991 after the fall of the Soviet Union. At the time Armenia was engaged in the local conflict with Azerbaijan (another ex-USSR republic), and was in desperate need for small arms. The submachine gun is one of the simplest automatic arms to design and manufacture, so Armenian engineers quickly developed a straightforward weapon, which can be easily manufactured by almost any mechanical workshop.
Later on, more than few K6-92 submachine guns made its way through the borders into the Chechen republic, the most turbulent part of the Russia. During mid-1990s Chechnya was heavily infested with separatists, Islamic extremists and other kinds of bandits, which found submachine guns to be convenient weapons for urban fighting. Separatist Chechen government attempted to produce a "local" copy of the K6-92 at one of machine-building factories in the city of Groznyj, but very few were made there due to production problems and quality issues. Chechen-made copies of the K6-92 submachine gun are usually referred to as "Borz" (which means "wolf" in Chechen language). It also must be noted, however, that underground workshops, run by separatist forces, also made some "generic" crudely made submachine guns, generally known under the same name (Borz). These "homemade" submachine guns can be distinguished by tubular receiver and extremely poor fit and finish. Overall, the K6-92 submachine guns are reported as crude arms, suitable mostly for close combat. Over last two decades, plenty of these submachine guns turned up in Russia and other former USSR states during various crimes of violence and illegal arms trafficking.

The K6-92 submachine gun is a simple blowback operated weapon  that fires from open bolt. Receiver is made from steel stampings, welded together. Cocking handle is located at the top, safety / fire mode selector is located at the left side of the gun, above the trigger guard. Gun can be fired in single shots or in full automatic. It is fitted with plastic pistol grip and a top-folding metallic buttstock.