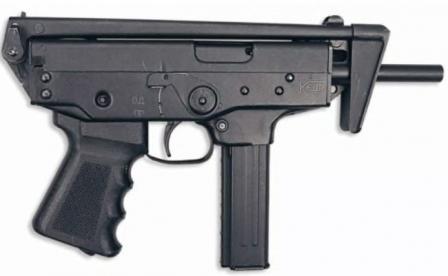 Kedr submachine gun, right side, with 20-round magazine and butt folded. 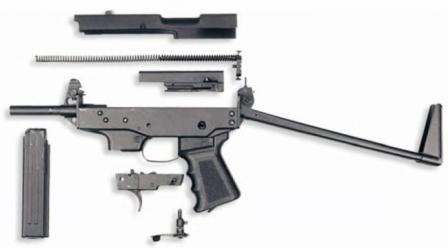 The Kedr submachine gun had been originally designed by the Evgenij Dragunov (the designer of famous SVD sniper rifle) in the early1970s asthe PP-71, on request from Soviet Army. But then project was shelved and revived only in early 1990s, when Russian police felt the need for increasedshort-range firepower. PP-71 was slightly modified and then manufactured in limited numbers and issued to various law enforcement forces across the Russia. It was soon discovered that the original 9x18mm Makarov ammunition was not powerful enough,so new type of ammunition had been developed. This new cartridge,9x18mm PMM,while retaining same dimensions, had slightly lighter bullet and heavier powder charge, which increased its performance. Basic Kedr design was slightly strengthened by 1994 for this new ammunition, and appeared as the Klin submachine gun. BothKedr and Klin are used in limited numbers by various Russian police and security forces. It must be noted that for safety reasons use of PMM ammunition has almost ceased in Russian law enforcement, and most units are issued standard 9×18 PM ammunition. Therefore, only Kedr version is currently manufactured for police use.

Kedr PP-91 submachine gun is blowback operated, selective-fired weapon. Itfires from closed bolt for enchanced accuracy, and features traditional hammer unit. Safety / fire mode selector lever is located on the right side of the stamped-steel receiver and permits for single shots andfull automatic fire. The only difference between Klin and Kedr is that Klin is slightly strenghtened and has radial grooves in the chamber, to slow down extraction of the more powerful 9×18 PMM ammo. KedrPP-91 submachine gun is fitted with top-folding steel butt, and can be equipped with detachable silencer. Standard sights are of open type,with L-shaped rear blade that automaticaly flips over to "short range"setting when butt is closed and to "long range" setting when butt is opened. Feed is from detachable box magazines holding 20 or 30 rounds.