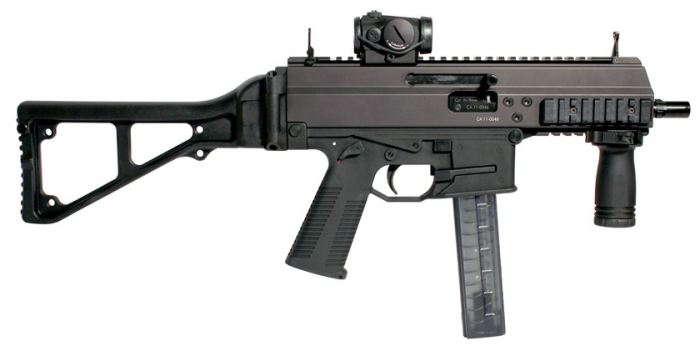 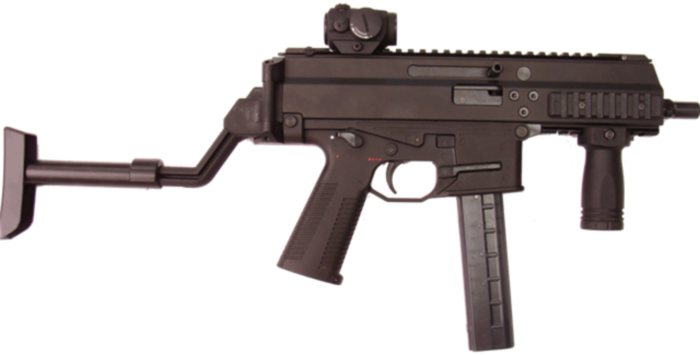 Advanced Police Carbine (APC in short) is a most recent creation of the well-known Swiss company B&T AG (formerly known as Brugger & Thomet AG). It was first announced to general public in 2011. This weapon is a result of careful analysis of current requirements of Law Enforcement and Military Special Forces for a compact and versatile pistol-caliber weapon, which can be used for either defensive role (as PDW) or as an offensive weapon for many CQB and MOUT scenarios. B&T APC submachine gun is a modular weapon which will be available in several calibers (initial offerings are ubiquitous 9×19 Luger and .45APC, still popular in USA) and in several configurations, including selective-fire submachine guns strictly for ‘government users’ and semi-automatic only carbines for certain police and security applications as well as for civilian use (where permitted by law). B&T APC submachine gun is offered as a ‘package’, with nice set of accessories including red dot sight, detachable forward grip, sling, detachable flashlight mount, so it is ready for serious tactical use right out of the box. It is built with typical Swiss quality and attention to details, and is compliant with NATO qualification requirements. Serious considerations also were made to ensure affordable cost of the package.

B&T Advanced Police Carbine / APC submachine gun is a simple blowback operated weapon, firing from closed bolt. It is available in two versions, selective-fired and semi-auto only. In either version, it has a hammer-fired ignition system. Safety / fire selector switches are of ambidextrous design, and conveniently located at the top of the pistol grip. Selective-fired APC submachine guns have three position levers (Safe – Semi – Auto) while semi-automatic carbines have two-position levers (Safe – Fire). One interesting aspect of the semi-auto APC is that it uses AR15-style trigger unit, which will accept many after-market replacement parts. All other controls, such as bolt hold-open release button and magazine catch button, also are duplicated on either side of the gun for ambidextrous use, and charging handle can be installed on either side of the bolt, according to user preferences. Construction of the B&T APC submachine gun involves modern materials, such as aerospace-grade alloy for upper receiver and polymers for lower receiver / pistol grip, magazines and shoulder stock. B&T APC submachine gun is designed to handle most, if not all types of factory ammunition in its respective caliber, feeding from double stack, double feed magazines of various capacities, originally developed for B&T MP9 or MP45 submachine guns. All B&T APC submachine guns come with 3-lug barrels which would accept quick-detachable sound suppressors (‘silencers’), also developed by B&T.

Special version of the B&T APC submachine gun, known as APC-LE, is adapted for effective use of standard, normally supersonic 9mm ammunition in conjunction with the sound suppressor. This version features built in, manually switchable gas valve which allows to release some powder gases from the bore, decreasing average working pressures and thus dropping muzzle velocity of the bullets below the speed of sound, to further decrease firing signature. When silencer is not required or when special subsonic ammunition is available, this valve can be disengaged to use all available energy of the powder gases to propel the bullet.

Standard furniture for the B&T Advanced Police Carbine / APC submachine gun includes side-folding shoulder stocks (either more or less typical skeletonized one or proprietary B&T Helmet Stock, intended for use by police personnel wearing helmets with protective ballistic visors). Other accessories like forward grip, tactical lights and/or lasers can be mounted on NATO accessory rails, also known as Picatinny-type rails, installed on the forend. Standard sighting equipment includes Aimpoint TL1 red dot sight, mounted using B&T quick detach mount onto the top accessory rail, and integral back-up iron sights on folding bases, which are normally folded out of sight but can be rapidly popped up for emergency use.