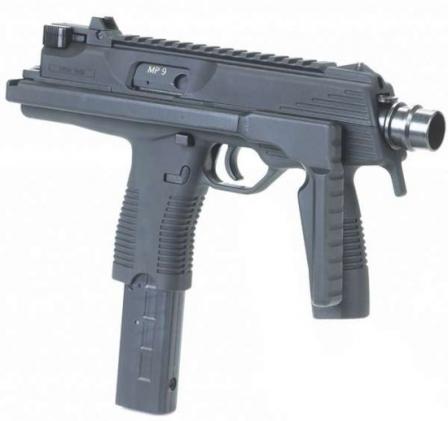 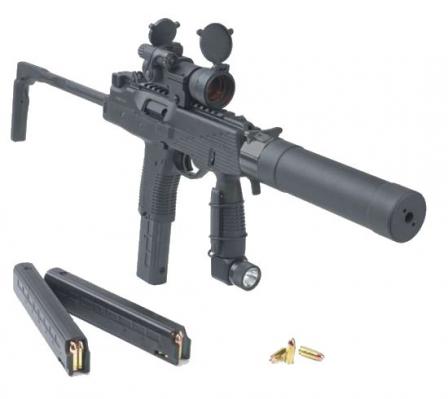 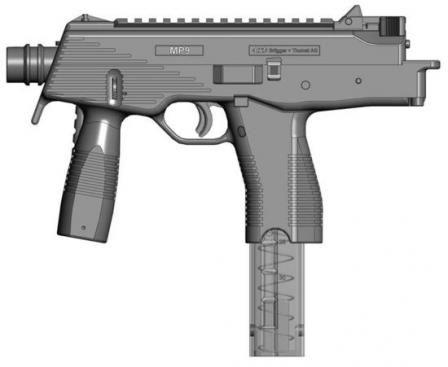 The Brugger Thomet MP9 submachine gun started its life in 1992 as the Steyr TMP. The famous Steyr-Mannlicher company developed it in Austria, but Austrian export licensing laws, lack of a sales and resulted in the decision of Steyr to drop the TMP from the product line in 2001. Then, another well-known company, Brugger Thomet AG of Switzerland, bought all the drawings, patents and rights for the TMP design, and set its team to fully develop the promising design which resulted in over nineteen engineering changes in the product. At the present time the MP9 (which stands for 'Machine Pistol 9 millimeter') is produced and marketed by the B+T. According to available information, B+T MP9 is already in use by some police units in Switzerland.

MP9 is an interesting weapon,offering interim solution between true 'machine pistols' such as Beretta93R or Glock 18, and full-size submachine guns, like the Beretta 12S or H&KMP5. While the former weapons are very compact, they full-auto fire capability is severely limited by high recoil, short barrels and high rates of fire; on the other hand, full-size submachine guns often are too big, especially for close protection teams, police working in plain clothes and entry team when engaged in room-to-room searches and other such operations in confined spaces. Therefore, the MP9 falls directly in between, being in the same niche as Ingram MAC-10, H&K MP5K or IMI Mini-UZI. MP9 offers lower, and thus more controllable rate of fire (900 rounds/minute as opposed to 1100-1200 rounds/minute in automatic  pistols like M93R or G18), MP9 also features bigger magazine capacities, integral front grip and shoulder stock, and,according to the last trends in tactical solutions, an integral Picatinny type rail which can accept a wide variety of sights and other accessories. Comparedto full-size submachine guns, MP9 trades effective range for more compact size and lighter weight, and ability to be fired single-handedly when the operator has his secondhand occupied such when holding a ballistic shield.

The MP 9 is a short recoil operated, locked breech, selective fired weapon. The MP 9 features a rotating barrel locking, and the bolt is telescoped around the barrel for about half of its length. The entirebolt/barrel group is enclosed in lightweight polymer housing, which protects the mechanisms from elements and rough handling. The MP 9 is hammer fired, and MP 9 fires from closed bolt for greater accuracy. Trigger unit features a drop safety, as well as ambidextrous safety / fire selector in the form of the cross-bolt push-button, located in the grip behind the trigger. The cocking handle is located at the top rear of the receiver/housing, and does not reciprocate when gun is fired. The bolt stays open after the last shot from magazine is fired, facilitating for faster reloading. The muzzle end of the barrel is protected by muzzle cap, which is shaped to accept proprietary silencer, also manufactured by B+T. Side-folding buttstock is made from polymer,and easily goes out of way when not required. Standard sights are of ghost ring(diopter with large aperture) type, and are fully adjustable, with ability to mount red-dot or night sights onto integral Picatinny/MIL-STD rail. Since the receiver/housing of MP 9 is made from polymer, it could be available indifferent colors (such as basic black, military green or desert tan).