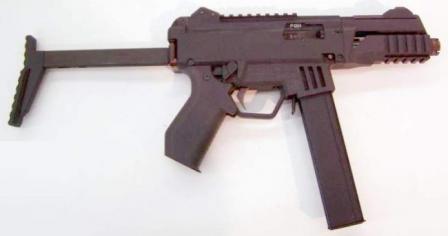 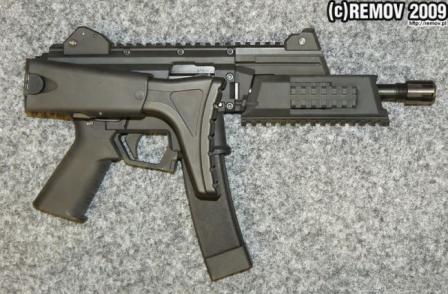 SCORPION EVO III submachine gun is a simple blowback operated, selective fired weapon that fires from closed bolt. It has a separate hammer unit, with ambidextrous safety / fire mode selector, that offers single shots, 3-round bursts and full automatic fire modes. The charging handle is located on the left side of the gun, above the forend. The receiver, pistol grip / trigger unit and the forend all are made from polymer. The side-folding shoulder stock is also made from polymer, and can be adjusted for length of pull due to telescopic design. Iron sights are installed on removable bases, using integral Picatinny type rail on the top of receiver. Additional sighting equipment can be added using this same rail; three more accessory rails are installed at the sides and bottom of the forend. Feed is from detachable box magazines, made of semi-translucent plastic, that hold 20 or 30 rounds of ammunition.