Very early model of the Furrer recoil-operated submachine gun made at W+F, dated back to early post-WW1 period, caliber 7.65×22 Luger. 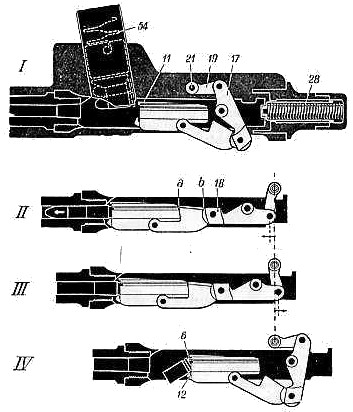 The Lmg-Pist 41 (Leichtes Maschinengewehr Pistole – light machine gun- pistol) submachine gun was developed by Rudolf Furrer at Swiss state-owned Waffenfabrik Bern (W+F) arms factory. It was produced for army trials andhastily adopted in 1941 over four other contestants, with the main reasons for adoption being, most probably, the similarity of the design to the already adopted and proven 7.5mm Lmg 25 light machine gun of the same designer and the importance and influence of the designer Col. Furrer, who at the time was superintendent of the W+F factory. The Lmg-Pist 41 submachine gun was so complicated and expensive to make that only few were made before 1944, when it was somewhat improved and designated Lmg-Pist 41/44. despite improvements, itwas still one of the most complicated and expensive submachine guns of its time,and less than 10,000 Lmg-Pist 41/44 submachine guns were made in total at W+Fbefore production was terminated in favor of less complicated and more affordable MP 43/44 submachine gun, a license-built version of the Finnish SuomiM31 submachine gun made in Switzerland by Hispano-Suiza. Remaining Lmg-Pist41/44 submachine guns served with Swiss army until late ninety sixties or even longer.

The Lmg-Pist 41/44 submachine gun uses short-recoil operated action with locked bolt. It fires from an open bolt (the barrel also is held back when gun is cocked, and it is released only when the trigger is pressed). Barrellocking is achieved by using a modified Maxim-type toggle-lock.Unlocking (breaking of the toggle) is controlled by an additional thirdlink, which connects the rear end of the toggle with the frame. Upon recoil, the toggle opens to the left, therefore receiver has a large window in its left wall, which is also used as the ejection window.
The specific aspect of the Furrer system, as compared to other short-recoil operated guns (toggle-locked and others), is that the boltand barrel are mechanically linked for the entire cycle of the action,not just through its “locked” part. This means that the entire movement of the bolt is controlled by the recoiling movement of the barrel,although the bolt recoil velocity is necessarily much higher than recoil velocity of the barrel. This linkage results in constant and accurate timing between all moving parts; another benefit is the greater reliability of the system, as the entire mass of the recoiling barrel is used to move the bolt through the whole operating cycle. The drawback is the very close tolerances necessary in the linkage system to achieve proper timing, which increases the cost of the weapon, and considering the relatively low power of the 9×19 ammunition used in this gun (compared to original Lmg 25 machine gun that fired full-power7.5x55cartridges) it appears to be a gross engineering over-kill for a submachine gun.The feed was from box magazines, inserted horizontally from the right, wooden stock was fitted with pistol grip and folding forward vertical grip.