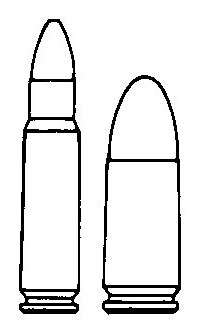 The Small Caliber Machine Pistol, or SCAMP in short, was designed in 1969-71 timeframe by famous American Colt gun making company as a possible replacement for venerable US M1911A1 pistol. In a modern terminology, Colt SCAMP submachine gun was THE Personal Defense Weapon (PDW) defined – compact, easy to carry, with lightweight, small-caliber ammunition that fired small pointed bullets with noticeable muzzle velocity. Lightweight small projectile ensured light recoil and flat trajectory out to 150 meters, increasing hit probability for poorly trained military personnel. Further increase of hit probability, along with increased lethality and stopping power at short ranges was to be achieved by firing short, controlled 3-round bursts with rate of fire up to 25 rounds per second (1500 rounds per minute). The proprietary .22 SCAMP (5.56x29mm centerfire) cartridge was loaded with pointed jacketed bullet weighting 40 grains (2.5 gram), with muzzle velocity about 2100 fps (640 m/s). Apparently, only one prototype of the Colt SCAMP submachine gun was ever built. It was tested by US Army and Air Force in around 1974, and was eventually rejected for unpublished reasons.

Colt SCAMP submachine gun is gas operated, locked breech weapon that could fire single shots and controlled 3-round bursts. Safety / fire mode selector switch is located high on the receiver, above the pistol grip. It has annual gas piston, located around the barrel, and bolt locks into the receiver with single tilting locking flap, which is raised up to engage locking shoulder in the receiver. The hammer unit is unusual as the hammer is located “upside down”, with hammer pivot axis placed above the barrel. This is done to ensure lowest possible bore axis placement in relation to the pistol grip. Combined with muzzle brake-compensator, low bore axis ensures minimal muzzle rise during off-hand shooting. Colt SCAMP submachine gun is shaped like a large pistol, with box magazine in the grip and no shoulder stock of any sort. It is intended for holster carry and pistol-style one- or two-hand shooting. Most internal parts of the SCAM are made from stainless steel, with external shell being made of fiberglass-reinforced plastic.