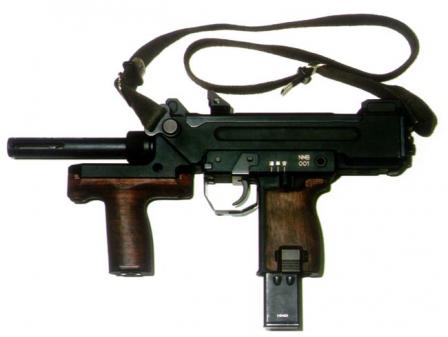 Minebea M9 submachine gun was developed by Japanese Minebea company to replace obsolete US-made M3 submachine guns in service with Japan Self-defense Forces (JSDF). JSDFadopted this weapon during early 1990s to arm secondary military personnel like tank, vehicle and artillery crews (M9 is issued as a personal defense weapon instead of the traditional pistol). Minebea M9is based on Mini-Uzi submachine gun. It was produced under license from IMI (now IWI Ltd), and it seems that it is no longer made. Some sources in Japan suggest that JSDF is looking to replace this submachine gun (which has some dubious features) with German-made HK MP5 submachine guns.

In its basic design, Minebea M9 submachine gun closely resembles the Mini-Uzi.It has the same simple blowback action with bolt that telescopes around the rear part of the barrel. Firing is from open bolt (presumably), infull and semi-automatic modes. Unlike its prototype, Japanese submachine gun is fitted with additional front grip and a flash hider on the barrel. On the other hand, there's no shoulder stock, and this greatly limits the accuracy of fire, especially when firing in full automatic mode with such high rate of fire.