American-180 submachine gun with 176-round drum, left side view. 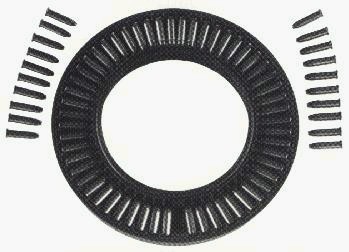 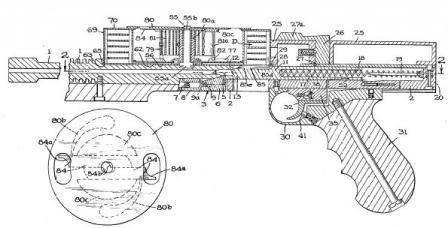 Drawing from original patent, issued to Richard Casull in mid-1960s.

The American 180 is one of the most interesting submachine guns. The idea of the very high capacity, small caliber rifle which can be fired for long time without reloading has been devised by the American gun designer Richard (Dick) Casull in early 1960s. During the same time he produced about 80 semi-automatic rifles, known as Casull Model 290 rifles, in.22LR, with 290-round flat pan magazines. these rifles were finely made and quite expensive.

During early 1970s the idea of Casull rifle has been upscaled into small-caliber submachine gun, intended for police use. The .22LR ammo,which is low powered by all standards, has advantages of low report, low recoil,low probability of ricochets and over-penetration, as well as good accuracy. Necessary stopping power has been achieved by multiple hits in a short period of time,thanks to aforementioned low recoil, high rate of fire and very large magazinec apacity. Designated as American-180, the submachine gun was initially manufactured in Austria under contract from US-based company, and then imported into USA by Christopher and Associates. latter guns were manufactured by American Arms Internationa land Illinois Arms Company, Inc. (ILARCO). Significant numbers of American-180SMG's were purchased by police departments and prisons, mostly for riot control situations. But is soon had been found that, while single .22LR round cannot defeat typical police body armor if used by 'wrong' hands, but long bursts will literally dig through the body armor and do significant damage to the officer wearing it.

American-180 is a conventional blowback operated submachine gun,firing from the open bolt. It can be fired both in single shots and in full automatic mode. The receiver is a solid machined steel part, the furniture ismade from wood. The most unusual part of the gun is its multi-layer flat pan magazine, reminiscent to magazines of the pre-WW2 aircraft machine guns. Theoriginal magazines were made from steel and held 177 rounds in three layers,bullets pointing inwards (to the center of the pan). Late production magazines were made from translucent Lexan plastic, and held either 3, 4 or 5 layers of ammunition, with 165, 220 or 275 rounds capacity respectively. Some guns were chambered for .22 ILARCO ammunition, also known as .22 Short Magnum rimfire, as it was a .22WMR (Winchester Magnum Rimfire) cartridge shortened to the same length as .22LR cartridge. As the .22 ILARCO was more powerful, the rate of fire increased from already spectacular 1 200 rounds per minute to 1 500 rounds per minute. Spent cases were ejected to the bottom. American-180 submachine guns were fitted with adjustable sights, and a 'Laser Lok'  laser sight has be enoffered as accessory. For stationary use in prisons or during riots on the streets, ILARCO provided dual and quadruple mounts for American-180.