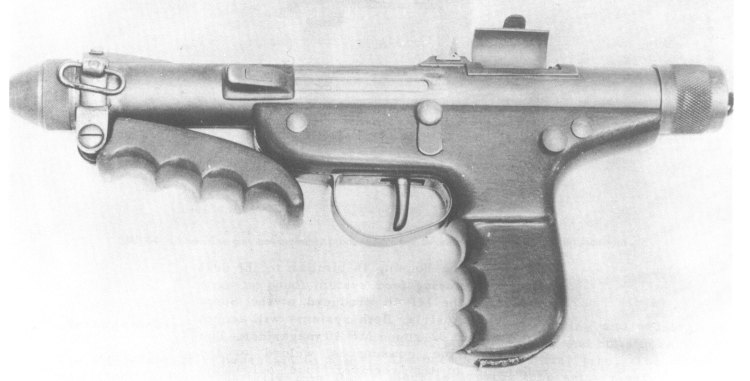 Erma MP-56 / Mauser MP-57 submachine gun was originally designed by a Frenchman called Louis Camillus and in 1955-1956 this weapon was submitted to Bundeswehr (German Army) trials as Erma MP-56 (made by Erma Werke). However, in 1957 rights to this design were transferred from Erma to Mauser Werke, where it was modified and submitted to next round of trials as Mauser MP-57, but lost to Israeli Uzi (adopted by German army circa 1959 as MP-2). Only about 25 of MP-57 submachine guns were made at Mauser. It was tested in several countries besides Germany, but no orders followed, and design was promptly shelved.

Mauser MP-57 submachine gun is a blowback operated, selective fired weapon which fires from open bolt. Fire mode selection is made through the safety / selector lever on the left side of the gun, above the trigger. Gun also features automatic grip safety (at the rear of the grip). Magazines are inserted into the pistol grip. Mauser MP-57 is fitted with top-folding shoulder stock and folding foregrip below the barrel.