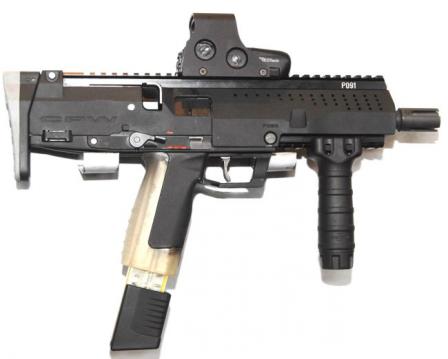 The Compact Personal Weapon (or CPW in short) is a new development o fSingaporean company ST Kinetics. CPW follows the current trend for modularity of design, with intent of providing a compact personal defense weapon of about pistol size but of greater effectiveness for military personnel which is normally not issued with rifle of any kind. It is yet to be seen if STK CPW will be produced in any numbers and adopted by any military or security force.

The STK CPW is delayed blowback operated weapon that fires in single shots and in full automatic mode. It is made mostly from impact-resistant polymer, with aluminum alloy receiver. Barrel and bolt can be replaced to change the caliber from standard 9×19 to others (most possible choice being some small-caliber armor piercing round such as 4.6×30 HK or 5.7×28 FN). Of cause, this also will require use of different magazines, which, in turn, may require replacement of the rear part of the grip. The rear (removable) section of the grip and the magazine body are made from translucent polymer for easy check of remaining ammunition supply.Gun features ambidextrous controls, including safety, fire mode selector, bolt catch release and magazine release. It is fitted with telescoped buttstock.Sights are installed using integral Picatinny rail on the top of receiver, with standard being either open sights or red dot. Additional Picatinny rail is provided at the bottom of the gun housing, in front f the trigger guard.