The .30-06 T44 experimental machine gun, which combined design of FG 42 rifle and feed system of MG 42 machine gun. The T44 served as a first step in development of M60 machine gun.

M60 machine gun on integral bipod (note how gas cylinder is safe-wired to protect it from self-disassemblying). 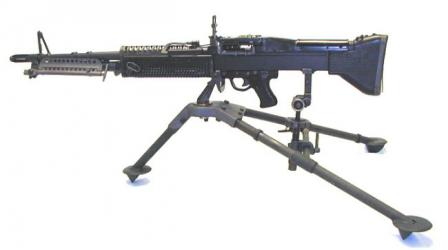 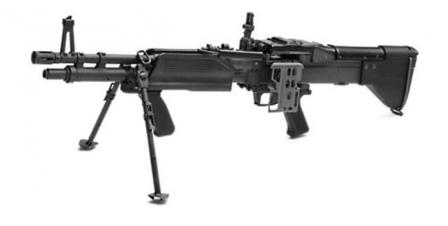 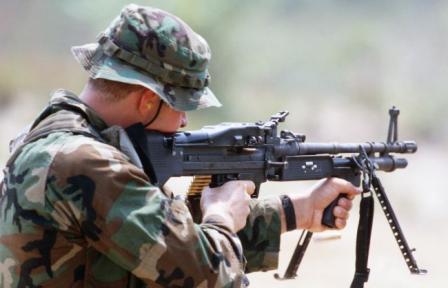 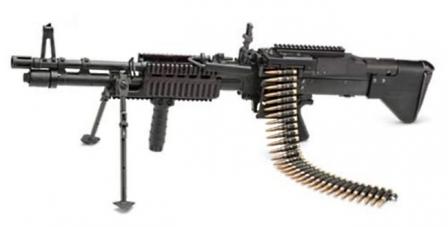 Like other nations which faced German troops, the USA gave a great deal of attention to German machine guns. Early experiments to convert the MG 42 to the US rifle calibre, carried out by the Saginaw Steering Gear division of General Motors Corp with the T24 prototype, resulted in a complete failure, because someone ‘forgot’ that the US .30-06 cartridgeis about 6 mm (1/4 of an inch) longer than the German 7.92mm Mausercartridge. Despite that setback, the US Army set out to develop a general purpose machine gun for its troops, and in 1945 started aseries of trials to test guns developed by various state armories,American private companies and some systems from foreign contractors.
In1946 the US Army tested the .30-06 calibre T44 machine gun, an interesting weapon which combined features from two remarkable Germandesigns – the action of the FG42 machine rifle and the belt feed unit from the MG42 machine gun. The most notable feature of the T44 was theplacement of the belt feed module, which was located on the left sideof the receiver (with the belt passing vertically from bottom to top)instead of the more common top position with a lateral belt movement.
Thedevelopment of the T44 was stopped in 1948, when it was decided toconcentrate on a new, shortened 7.62mm T65 cartridge. Work on a newprototype, designated T52, commenced in 1947 and was continued up until1952, when it was decided to persuade a derivative of the T52 design,known as the T52E3, under the new designation T161. Originallychambered in .30-06 (as a backup measure for the guns chambered for new7.62mm T65E3 ammunition), the T161 went through several versions,starting with the 7.62mm T161E1 and up to T161E3, which was finally adopted in 1957 as the “machine gun, 7.62mm, M60”.

The M60 machine gun is a gas-operated, belt-fed, air-cooled weapon which fires from an open bolt and in automatic mode only. It has quick-change barrels with no need for headspace adjustments. Most of the steel partsare produced using stamping and forming techniques.
The M60 has also-called “constant volume” gas system with a short-stroke gas pistonlocated below the barrel. This piston has a cup shape (with the opening facing forward) and a set of radial holes which, in the forward position of the piston, are aligned with the gas port in the barrel.The theory of this system is that once gas pressure in the chamber(formed by the piston internal cavity and front of the gas block) is enough to operate the moving parts, the holes in the piston will go out of alignment with the gas port, cutting off the supply of high-pressure powder gases. This also means that the system is self-adjustable andthe cyclic rate of fire cannot be easily adjusted. In practice the gas piston could be installed improperly (with the opening pointingrearward), turning the M60 into manually operated, single shot weapon.The gas block also tends to unscrew itself into its component parts under sustained fire, so its parts were often safe-wired together bytroops improvising in the field. Also, unlike many other guns, each barrel carries its own gas block with gas piston, increasing the weight of spare barrel kits. Locking is achieved by a rotating bolt with dual lugs at the front.
The M60 uses a belt feed with a disintegrating steel belt running from left to right only. Feeding is of the one-stagepush-through type. The feed system of original M60 guns is built into the hinged feed cover, and is operated by a roller-equipped stud at thetop of the bolt. The “simplified” design of the original belt feed module required that the belt feed cover must be closed only when thebolt is locked to the rear (cocked). If closed on the bolt in its forward position, an attempt to cock the gun will result in damage to the feed group. The belt is fed from 100 or 200-round boxes or soft pouches. “Combat packs” with a 100-round belt can be attached to a special hanger, mounted on the left side of the receiver.
Thetrigger and sear group along with the manual safety are incorporated into the detachable pistol grip with an integral trigger guard. It is attached to the bottom of the receiver by one cross-pin at the front.The push-pin is held in place by a leaf spring, but during rough handling and / or intense fire, the cross-pin sometimes works itselfloose, leading to the pistol grip with trigger unit becoming separatedfrom the weapon. This often results in a “runaway” gun, as the sear isunable to engage the bolt and the gun fires until the ammunition runsout or it jams. Another source of problems which also could result in adangerous “runaway” is the point of engagement between the sear andoperating rod. It is prone to wear and, once worn enough, the sear isunable to stop the bolt.
The standard M60 is fitted with opensights: a ramp-type rear, mounted on the receiver, and a post-typefront, mounted on the barrel. Unfortunately the front sights are not adjustable, so the zeroing of each barrel is made by adjustments of therear sight. Therefore, if a gunner desires to have all of his spare barrels properly zeroed, he has to zero each barrel and record its settings for the rear sight; once in combat, he has to remember to seta proper setting for each spare barrel installed on the gun. Of course,in real combat many gunners simply used one “combat zero” setting for all barrels, with obvious (although insignificant in some cases)degradation of accuracy.
Original M60s are fitted with plastic buttstocks and plastic forearms, combined with heat shields made from stamped steel. Folding carrying handles are attached to the heat shield close to the center of gravity of the weapon. Folding bipods are adjustable for length and permanently attached to the barrel. This further increases the weight of each spare barrel, and while the bipodsare intended to be used as handles during the removal of hot barrels,the gun itself has to be held in the air by the gunner while his assistant swaps the barrels.
For sustained fire missions the M60 canbe installed on an M122 tripod (with optional T&E mechanism) and on a variety of pintle mounts on vehicles and naval vessels.

Modifications:
M60E1:an improved version of the basic weapon, with Stellite-lined barrels, a gas cylinder and bipod attached to the receiver instead of barrel, anda number of other improvements. Despite its obvious advantages over basic M60, it was never built in numbers or approved for service.
M60E2: coaxial tank version, with a remote trigger and gas evacuating tube attached to the front of the gas cylinder.
M60C: remotely-operated aircraft (helicopter) gun
M60D:helicopter or land vehicle weapon for flexible mounts. The plastic buttstock and pistol grip / trigger unit are replaced with dual spadegrips and an appropriate trigger unit. A special ring sight is installed for airborne applications. Some current versions (as made byUS Ordnance Inc) are provided with lightweight bipod for emergency dismounted use.
M60 Lightweight:an improved version of the M60, developed during the 1970s by the Sacodivision of Maremont Corp. The gas piston group is attached to thereceiver instead of barrel, and a light folding bipod attached to thegas piston tube. The forearm and upper handguard are omitted and replaced by a forward pistol grip. The belt feed unit is improved topermit the safe closing of its cover when the bolt is in its forward position. A number of other improvements were made, such as frontsights adjustable for zeroing.
M60E3:a derivative of the M60 Lightweight, sharing most of its features plusa lightweight plastic forearm combined with a front pistol grip. In limited use with Special Operation forces of the US Army and Navy.
M60E4:a further improvement over the M60E3, developed during early 1990s bySaco Defence (now part of General Dynamic). Currently manufactured under license by US Ordnance. Key improvements are: the introduction ofthree styles of barrels (long / standard, short and assault), and animproved belt feed with greater pull force for improved belt lift capability. Several parts are redesigned and strengthened. In limited use by the US Navy (mostly Special Operations forces).
Mk.43 mod.0: designation of M60E4 in US Navy service
Mk.43 mod.1:designation of modified M60E4 in US Navy service; gun differs from Mod.0 by having feed cover with integral Picatinny rail, plus a set of similar rails is added to the handguard, and integral forward pistol grip is replaced by removable vertical grip attached to the rail.