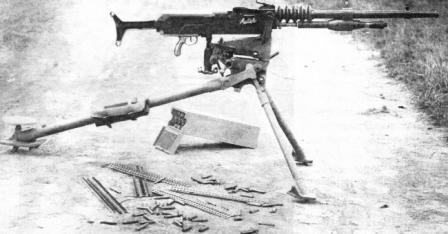 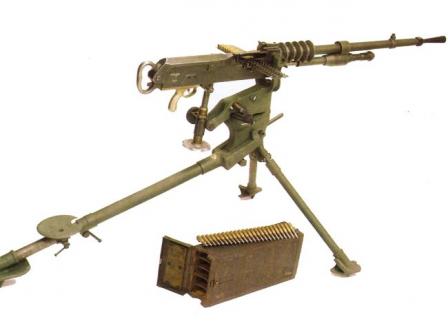 The first self-powered machine guns began to appear in France during the closing years of the 19th century. Probably the most successful of these was the line of machine guns developed by famous French Hotchkiss company.The first production Hotchkiss machine gun, known as Mitrailleuse Modele 1897 (Mle.97 in short) was based on the patents of the Austrian designer Adolf Odkolek von Augezd. Soon the Mle.97 evolved into the Mle.1900 weapon, which was put into production and sold for export. The Hotchkiss M1914 medium machine gun was a further evolution of the Hotchkiss M1900 machine gun, and it became the most successful and well-known weapon of the whole line. It proved itself quite successful on the fields of the WW1 with French army and American Expeditionary corps in Europe, and served with French troops until the WW2. During WW2, many captured Hotchkiss guns were used by German forces.
Hotchkiss Model 1914 machine guns were generally known for good reliability, and for design that was simple, robust and easy to maintain, especially comparing it with some contemporary weapons, designed during pre-WW1 era.

The basic Hotchkiss medium machine gun is a gas operated, air-cooled, full automatic only weapon, which fires from an open bolt. It uses a relatively large gas block below the barrel, with a multiple-position gas regulator; the gas piston is of the long-stroke type. Locking is achieved by tipping the locking piece (which is hinged to the rear of the bolt) down, to engage the recesses in the receiver. A large return spring is located below the gas piston in the receiver. Barrel was fitted with bronze radial radiator of significant diameter.
The feed system utilizes rigid steel strips, which hold the cartridges in parallel by a series of stamped spring fingers. Strips are inserted from the left side, with cartridges located above the strip. Upon cycling the action, a toothed wheel, operated by cams on the reciprocating gas piston, indexes the strip so that the next cartridge is in line with the barrel, and upon the closing movement of the bolt it pushes the cartridge straight into the chamber. Empty cases are ejected to the right side of the gun. This system worked very well with rimless cartridges, and slightly less so with rimmed ones. For use in tanks and fortifications an alternative semi-rigid belt was developed. This belt consisted of 3-round strips, linked together. The standard belt consists of 84 3-round pieces, hinged one to another, for a total capacity of 251 rounds (the last place-holder in the belt was left empty). Any M1914 gun could take either standard strips or semi-rigid belts.
Gun controls include a slim pistol grip (made of brass) with the trigger, located below the receiver, and a manual safety on the left side of the receiver. Additional spade grip is fitted to the rear of the receiver.
There were a wide variety of mountings available for Hotchkiss machine guns, from light tripods without traverse and elevation mechanisms, and up to artillery-type wheeled mounts with armored shields and all associated aiming equipment. The M1914 machine gun was most often used from the infantry tripod M1916, which originally permitted fire only against ground targets. This tripod had traverse and elevation mechanisms, and a bicycle-type seat for gunner, mounted on the rear leg. In 1928, an anti-aircraft adapter was adopted by French army, which allowed the use of M1914 guns against aerial targets from M1916 tripods.