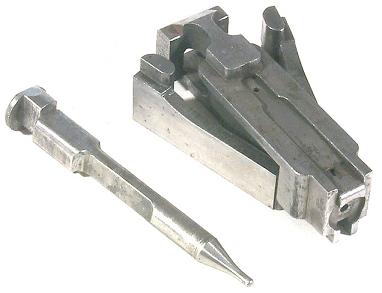 The DP (Degtyarev Pechotnyi, or Degtyarev Infantry) light machine gun was one of the first small arms designed after the 1917 in USSR. It was adopted as an standard LMG of Red Army in 1927 and served with distinction until the end of World War 2. It was rugged and reliable weapon, but not withouth certain flaws, so, based on experience gained from battles of WW2, it was slightly modernised in 1943-44 to became DPM. or DP Modernised. One of proposed modifications was replacement of the heavy and uncomfortable flat pan magazine by the belt feed, but due to some resons, this particular improvement was released only in 1946, when a further improved version was adopted by Soviet Army as a RP-46 (Rotnyj Pulemet, 1946, or Company Machine Gun). RP-46 filled the gap between the light squad automatic weapons like RPD and a heavy machine guns like SGM. RP-46 was used as a front line weapon until 1960s, when it was gradually replaced by the first Soviet universal machine gun – Kalashnikov PK. All those guns (DP, DPM and RP-46) were widely exported to the Soviet-friendly countries and regimes. RP-46 also was manufactured in other countries, most notably by China, as a Type 58 machine gun.

It also should be noted that a variations of the DP and DPM were also used as a tank and aircraft guns, named DT (DTM) and DA, respectively. Those guns featured flat pan magazines of smaller diameter but larger in height, heavier barrels and different stocks and mountings, but internally were quite similar to its infantry "brothers".

DP is a gas operated, magazine fed light machine gun. It utilises a long stroke gas piston, located under the barrel, which operates a bolt with two side-mounted locking flaps. When bolt comes into the battery, the stud, mounted on the bolt carrier, pusded the firing pin forward. A thick part of the firing pin thus swings the rear parts of the locking flaps out of bolt and into the locking recesses in the receiver walls. When shot is fired, a bolt carrier on its way back retracts the flaps out of receiver walls into the bolt and then opens the bolt. DP fires from the open bolt. Barrel is quickly detachable and can be replaced during the prolonged firing sessions. Recoil spring was located under the barrel, around the gas piston, and this was one of the few design drawbacks of the DP, since the spring was tended to loose its temper due to overheating. Another drawback was the magazine. Due to ammunition used, which was rimmed and less than suitable for automatic weapons, Degtyarev had to use a flat pan magazine, which could feed those cartridges reliably, but was too heavy itself, uncomfortable to carry and prone to damage. It is still an open quetsion why Degtyarev did not adopted an overhead box magazine, much like one found on british Bren (which also used an old, rimmed ammo).

Based on experience gained during the first part of WW2, DP was modenised to the DPM configuration. The key improvement was that recoiul spring was relocated to the rear part of the bolt, and a receiver extension was added behind the receiver to contain the spring. This mandated a redesigned stock with pistol grip instead of previous semi-pistol stock. Some other improvements were also made, most notably the more sturdy bipods and a manual safety, and DPM was carried by the Soviet troops through the rest of the WW2.

The sucess of the belt-feed German universal machine guns in the light MG role (on bipod) showed the necessity of a light, mobile machine gun, capable of high firepower, to be used on the company level. The fastes way was to introduce the belt feed to the existing light machine guns, and this had been done. The RP-46 is similar to the DPM in many respects, and differs mostly in that it had a heavier barrel (also quick detachable), a carrying handle, and a belt feed module. To minimise changes and to save the ability to use old DP/DPM flat pan magazines, the belt feed was designed as an add-on module. The feed was operated through the large bracket on the right side, which was connected to the charging handle. Since the charging handle was rigidly mounted on the bolt carrier, it reciprocated during the fire, and carried the belt feed bracket along with it. Similar method was used on the DShK heavy machine gun, which also was modified from original magazine feed to the belt feed. RP-46 used a non-disintegrating metallic belts, designed for Gorjunov SG-43/SGM medium machine gun. Belts were available in the 200 or 250 rounds variety and were carried in metallic boxes. Since there was no way to link the belt box t the RP-46, it was usually necessary to unload the RP-46 prior to move it, which was obviously a tactical disadvantage, when comparing to the most modern designs of that time (like the german MG-42, for example).