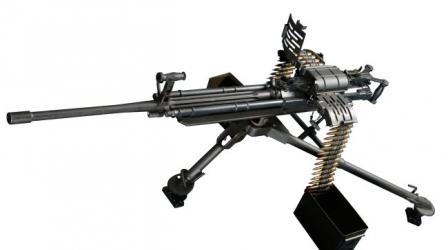 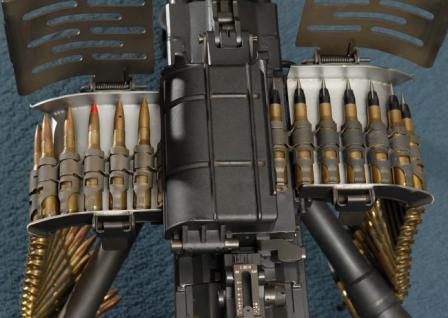 Recognizing the need to replace the obsolete 12.7mm Browning M2HB machine guns,during the early 1980s the CIS (now Singapore Technologies Kinetics /STK) company began to develop a new heavy machine gun. In this development CIS designers closely followed the path set by the unsuccessful American “Dover Devil GPHMG”programme, and tried to create a modular weapon better suited to modern tactical doctrines and production techniques. It seems that the Singaporean engineers succeeded in this effort, as in 1988 CIS introduced a new 12.7mm machine gun, simply designated “CIS 50MG”.After trials it was adopted by the Singapore armed forces as an infantry and vehicle gun, being installed on armoured vehicles and naval craft. It is also offered for export by its current manufacturer  Singapore Technologies Kinetics. This weapon is especially interesting as it has a dual belt feed system that permits fast and easy change of ammunition “on the fly”, i.e. between standard ball and armor-piercing SLAP – a system more often encountered in modern automatic cannons.

The CIS 50 MG is a gas operated, air cooled, belt-fed weapon. It has a quick-detachable barrel equipped with a carrying handle. The gun is operated using dual gas pistons,located in two gas tubes placed on either side of the barrel. The barrel is locked by means of a rotary bolt with multipleradial lugs that engages the barrel extension, eliminating the need for headspace adjustments. The CIS 50MG utilizes same “constant recoil”system that was previously used in the UltimaxLMG.
The gun isfed using disintegrating steel belts with M15 links, and has two feed units at either side of the receiver. There are two belt feedways mounted movably at either side, so at any given time only one feedway(left or right) is connected to centrally mounted feed sprocket. Thispermits a faster change of ammunition types, e.g. standard ball andSLAP. Empty cases are ejected downwards.
Firing controls include dual spade grips at the rear of the receiver, with a thumb trigger and a fire selector that permits single shots and automatic fire. Firing is from an open bolt only.
Standard mountings include the US M3 tripod (with special adapter), a proprietarylightweight AA tripod, and a number of vehicle mountings.
Standard sights are of the open type, with the front sight base being attachedto each barrel, so a proper zero can be maintained after the barrel replacement. A special sight bracket is provided on the receiver forinstallation of telescopic or night sights.