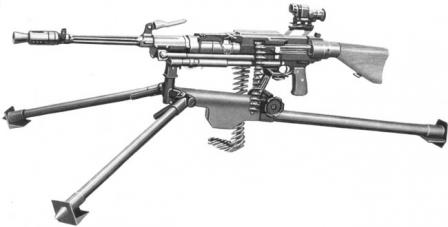 When in early 1940s the Swiss army requested a new, universal machine gun to replace old Maxim and Furrer guns of pre-war design, SIG company decided to develop an indigenous design, and between 1944 and 1951 turned out a series of gas-operated machine guns, fed using either twin-drum magazines or belts.SIG MG 50 machine gun lost the Swiss trials to rival weapon designed by Waffenfabrik Bern (MG51), but continued for a while asa commercial venture. A definitive version of this design was adopted by Denmark in .30-06caliber as SIG M/51; a version of the same gun, chambered in 6.5×55 was tested in Sweden as SIG MG53 but without success.

The SIG MG 50 is a gas operated, air-cooled, belt fed machine gun which fires from an open bolt in automatic mode only. The barrel is quick-detachable; its rear part, along with gas system below it, is enclosed by a tubular jacket without any cooling slots. The gas system is of the short-stroke type, and the gas cylinder is integral to the beech part of the barrel, so upon barrel replacement the gas cylinder and gas piston are also removed along with the barrel. The barrel is locked by a tilting bolt.Feed is via non-disintegrating belts assembled from 50-round lengths; the standard capacity is 250 rounds for tripod- or vehicle-mounted applications or 50 rounds (in a drum-type box) for light (bipod mounted) applications. Feed direction is from the left side only; empty cases are ejected downward through the aperture in the bottom of receiver.
The SIG MG 50 is fitted with a folding, non-detachable bipod which is attached to the front of the barrel jacket. For sustained fire missions the gun could be mounted on a special lightweight tripod.