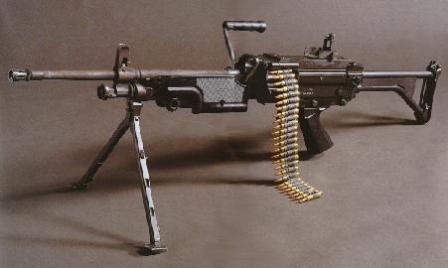 FN Minimi – Belgian-made general purpose machine gun. Note the lack of a heat shield above the barrel, and the tubular buttstock. 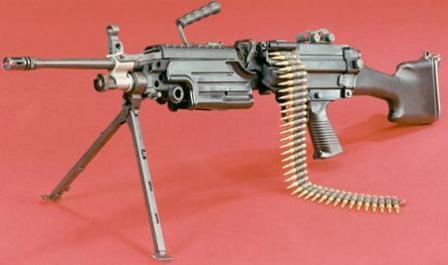 FN Mk.46 model 0 – a variation of the Minimi SPW, with additional Picatinny rail on the heat shield and buttstock variation, developed for US Naval Special Forces.

The FN Minimi Light Machine Gun was developed by the famous Belgian company FN Herstal, from the late 1970’s through to the early 1980’s. Mass production began in 1982 in Belgium, and at about the same time it was adopted by the US Armed forces as the M249 Squad Automatic Weapon (SAW).

Since its introduction the Minimi has seen widespread service, and numerous variations have also been developed. Firstly, the “Para” (Paratrooper) version was released, with a shortened barrel and tubular telescoping buttstock. This gun traded off some of the range and firepower of the other variations for compactness and maneuverability.

Recently, an SPW (Special Purpose Weapon) version was developed. This features a Para-type buttstock, a barrel of intermediate length (between standard and Para models), and a Picatinny-type rail mount, allowing a wide variety of sights and scopes to be mounted. To save weight, the magazine alternative feed option of the Standard and Para models was discarded. This version, in a slightly modified form, was adopted by the US Special Forces Command (US SOCOM) as the Mk.46 model 0 light machine gun. The US Navy has a separate designation system to the US Army, hence the use of ‘Mark’ and a model number, as opposed to the designation ‘M249’ elsewhere in the services.

The FN Minimi has an excellent reputation for reliability and firepower. Reports from the field of failures of M249 SAW weapons in Iraq are attributed to the age of the weapons in question not to their design. Most of the M249’s in the US Army were more than 10 years old at the time and quite worn out.

The Minimi is operated using a conventional gas action with the gas piston located below the barrel. The barrel is locked using a traditional rotary bolt. The barrel is quick-changeable, and has a carrying handle attached to it, to assist a quick replacement procedure.

The M249 has an alternative feed system, which allows it to use disintegrating metallic belts as a primary feed option, or M16-type box magazines as a back-up feed option. The belt is fed using the top feed unit, the magazines are inserted through the magazine port, located at the left side of the receiver and angled down. The Flip-up dust cover closes the magazine port when it is not in use, serving also as a belt guide. When the magazine is in place, this cover raises up and closes the belt-way to avoid dual feeds and jams.

Since the belt feed uses additional power to pull the belt through the gun, the rate of fire with the belt is somewhat slower (~ 750 rpm)than the rate of fire with magazine feed (~ 1000 rpm). The latest SPW and Mk.46 mod.0 versions of the Minimi have no magazine feed module as a weight-saving measure. The belts are fed from special 200 round plastic boxes that can be clipped beneath the receiver. All Minimi versions fire from an open bolt to ensure optimal barrel cooling between bursts.

The folding bipod is mounted under the gas chamber, and the gun has provisions for tripod or vehicle mountings. The open sights are standard, with the availability of a wide variety of optical and night sights for SPW and Mk.46 versions fitted with Picatinny rails.