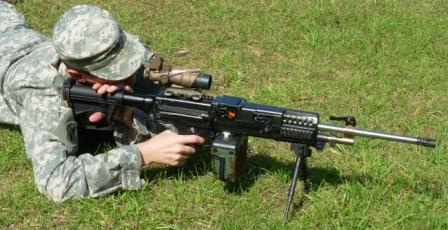 The LSAT Lightweight Small Arms Technology program was initiated by US Army early in 2000s, as an attempt to significantly reduce combat load of the infantrymen, especially those carrying the Squad Automatic Weapons / light machine guns, such as M249 SAW. In around 2004 the ATK corporation was selected as a prime contractor to develop appropriate small arms system, which would necessarily include new, lighter ammunition and a gun (guns) to fire it. Initial intent was to develop a caseless ammunition (which provides maximum savings in the weight and size), with a fall-back option for polymer cased ammunition with telescoped design (in this design bullet is fully 'buried' inside the powder charge withing the simple cylindrical case). By the 2010, ATK sucessfully developed both caseless (CL) and  and cased telescoped (CT) ammo, and several prototype weapons to fire it. The CT ammunition and guns currently are most developed, and show average 41% weight and 13% volume reduction when compared to the standard 5.56×45 NATO ammunition. The caseless ammo shows somewhat better numbers, but it is also more expensive and, as of now, remains on earlier stages of development. Current plans are to deliver 8 LSAT machine guns and 100 000 rounds of CT ammunition to US Army by May 2011, for initial assessment. Additionally, ATK recently displayed the LSAT carbine, which fires same CT ammo from 4-row detachable box magazine, holding 42 rounds. The carbine is still in early development stage. According to the ATK presentations at NDIA 2010 symposium, the manufacturer is ready to scale the LSAT system up for more potent and promising calibers in 6.5 – 6.8mm range, but not until specifically asked to do so by the US Army. Current (mid-2010) documents suggest that it is possible to see first units equipped with LSAT small arms system by 2016.

The ammunition for LSAT weapons is made in the form of simple cylinder. Caseless (CL) ammunition is made from formed propellant, with bullet located inside and primer glued to the rear. Case telescoped (CT) ammunition uses cylindrical cases, made from plastic. Ammunition weights now 8.3gram (CT) and 6.3gram (CL) compared with 12.2 gram for 5.56mm M855.Plastic machine gun links weigh 0.5gram instead of 2.0 gram for steel. This results in combat load of 600 linked rounds weighting 9.4 kg with standard M855 ammo, and just 5.8 kg with CT and 4.6 kg with CL ammo. Ballistics of both CL and CT ammunition is similar to the 5.56mm M855, and similar bullets are used.

The LSAT machine gun uses gas operated action with gas piston, located below the barrel. It operates oscillating chamber, which swings sideways to eject spent case and load a fresh one, and then swings back in line with the barrel to fire the round. Feed is from specially designed disintegrating belts with plastic links. It has a quick-change barrel and fires from open bolt, in full automatic and semi-automatic modes. Basic design of the weapon remains the same for CT and CL versions, although special measures are taken to provide gas seal between barrel and chamber in caseless version of the gun.
The LSAT carbine uses same ammo, but the feed and moving chamber design are different. LSAT carbine is fed from high-capacity, 4-row box magazines, which are inserted from below the gun. Upon loading, the moving chamber is dropped down below the barrel, so the fresh case can be forced rearwards from magazine and into the chamber. This also forces the spent or misfired case to be pushed out of the chamber and then fall out of the gun. Once the round is fully chambered, action forces the vertically sliding chamber up and in line with the barrel, and the gun is fired.