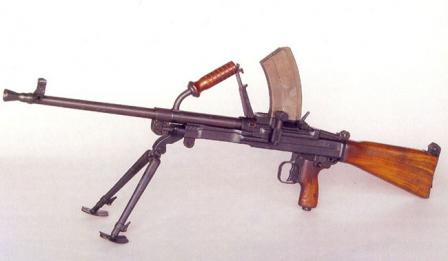 Vz. 52/57 machine gun with belt box mounted at the right side.

The Czech machine guns type 52 and type 52/57 (local designations Vz.52 and Vz.52/57, respectively) trace their anchestry to famous Czech ZB-26 machine gun of the pre-WW2 period. Vz.52 and Vz.52/57 machine guns are similar except for ammunition used. Due to their properties, these guns can fall in both light and medium (universal) machine gun categories – they use intermediate cartridges and integral bipods, and light enough to be classified as light ones, but, on the other hand, quickly interchangeable barrels and belt feeds made these guns more universal than others. Both vz.52 and vz.52/57 seen service with Czechoslovak Army and both were replaced in 1960s by universal MG UK vz. 59 (type 59).

Vz. 52 is a gas operated, selective fire, belt or magazine fed machine gun. It features underballer gas cylinder that operates the bolt carrier with tipping bolt. Feed system is so designed that it can take metallic belts or box magazaines interchangeably and withouth any modifications (vz.52 was one of the first of MGs with such feature). Box magazines are inserted from the top, and magazine port has a dust cover to protect the feed unit from elements when using belt feed. It should be noted that due to additional power required to tractor the belt, rate of fire with belt is lower than the rate of fire with magazine feeding. The barrel is quickly interchangeable. Vz.52 has a fire selector built into the trigger group – the dual trigger rocks around its center and the pull on the lower part of the trigger produced single shots, while pull on the upper part of the trigger produced full-auto fire.

It should be noted that original Czech cartridge, 7.62x45mm, was a little better in the terms of ballistics and effective range, that 7.62x39mm Soviet, and, thus, better suited for light machine guns, but unification across the Warshaw Pact caused Czechs to abandon their developments in the favour of the Soviet-compatible ones (similar situation was encounterd in the early 1950s, when USA pushed its 7.62x51mm cartrdidge down the throat of all NATO countries, when much better cartridges were available, i.e. .280 FN).