Danish M/1896 self loading rifle designed by Madesn and Rasmussen  and used by Danish marine infantry; this weapon served as a starting point for a whole line of Madsen light machine guns. 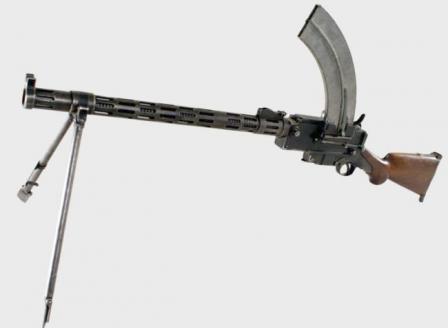 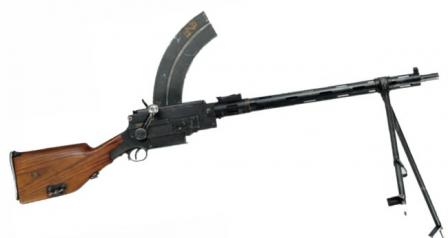 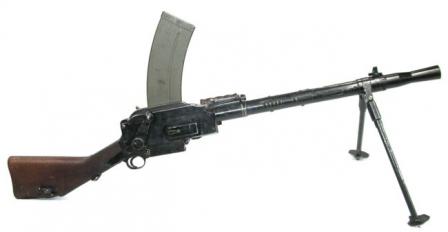 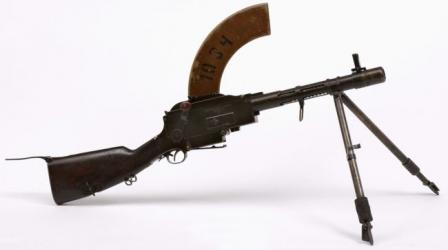 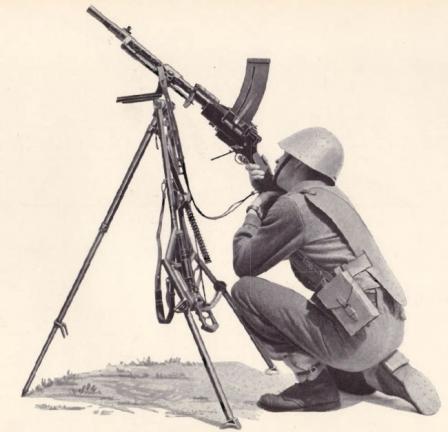 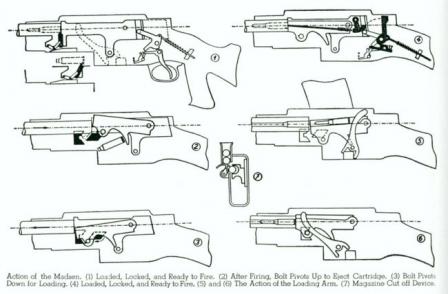 Diagram explaining the action of the Madsen light machine gun.

The history of Danish Machine guns is closely tied to one company and one name, although there were, in fact, far more names behind the whole story. The company in question was originally known as Dansk Rekyl Riffel Syndikat A/S, and the name that became a symbol of a Danish military industry was the Madsen. Vilhelm Herman Oluf Madsen originally was an officer in Danish artillery, and later became the War Minister of Denmark who, among other things, supported the development of domestic automatic arms. During his early work, Madsen teamed up with Rasmussen, director of the Kopenhagen arsenal, to develop recoil-operated semi-automatic rifle. Such rifle was adopted by the Danish Marines in 1896, and served as a starting point to develop a new, more potent, fully automatic weapon, which eventually became the first successful light machine gun in the world. All initial  development work was done at Kopenhagen arsenal, but, at the same time, a group of private investors formed commercial company known as Dansk Rekyl Riffel Syndikat, or DRRS in short. This company began to build modified and improved versions of the original Madsen / Rasmussen light machine gun for commercial sales worldwide. DRRS team was led by Jens Theodor Schouboe, who patented many features of the Madsen LMG to his own name, eventually creating false impression that it was he who designed the gun. It must be noted that most Madsen guns in Danish military service, especially the early ones, were built at Kopenhagen arsenal, while almost all commercial / export guns were built by DRRS, which later changed its name to Dansk Industrie Sindikat A/S (DISA), and used Madsen name as trade mark.

In a relatively short time Madsen light machine gun found its way into a number of European countries, being adopted or purchased in significant numbers by Austro-Hungary, France, Great Britain, Russia, Sweden, and a number of other powers. During the Great War, licensed manufacture was planned to be established in Russia and UK, although this did not happen in either country – in Russia because of the turmoil of the revolution of 1917 and in the UK because of financial disagreements. Nevertheless, large numbers of Madsen light machine guns were built and exported from Denmark from about 1905 and until about 1950, when mass production of this remarkable weapon ceased. It must be noted, however,that the Madsen LMG was offered through company catalogues up until mid-1960s, apparently on “made on order” basis, in ‘any military rifle caliber between 6.5 an 8 mm’, including then-new 7.62×51 NATO.
Through the first half of the twentieth century several dozens of countries purchased Madsen light machine guns; those included Finland, Great Britain, Netherlands, China, Imperial Russia, Portugal, and a number of other South American and Asian countries. Of course, Denmark itself also made a good use of Madsen guns. Most users discarded their “obsolete” Madsen guns by the 1970s, although some guns were and still are used in more remote parts of the world. In Indonesia, Madsen guns were used for training until about 1980, and very recently a few Madsen guns were observed in the hands of Mexican police forces, providing fire support against heavily armed gangs during anti-drug raids.

The Madsen light machine gun is a recoil-operated, magazine-fed, air-cooled weapon that fires from a closed bolt. It uses one of most unusual operating systems with a non-ramming breech block, broadly derived from the 19th century single-shot Peabody-Martini rifles. Despite its apparent complication, the Madsen was usually of high production quality, and worked reasonably well, especially in non-rimmed cartridges. Over fifty years of production, these machine guns were manufactured in about a dozen calibres from 6.5mm to 8mm, and in a great number of variations which differed in the shape of the accessories, minor parts details etc.
The barrel of the gun is heavily finned and enclosed within a tubular jacket with a number of cooling ports. On late production guns the front of the barrel jacket also serves as a recoil booster and a flash hider. If necessary, the hot barrel can be replaced with a fresh one under field condition in reasonable time.
The basic action can be described as short-recoil operated, with a non-reciprocating, swinging breech block. The recoiling barrel is attached to the barrel extension, which in turn holds a breech block that is permitted to swing up and down relative to the axis of the breech. The swinging axis is located toward the rear end of the breechblock. When the breechblock is lowered below the bore axis, loading is achieved through the use of a separate swinging arm; when the breechblock is raised above the bore axis, extraction and ejection can take place. Therefore, the entire feed / lock / ejection cycle is controlled by three separate sub-assemblies – feed arm, breechblock, and extractor / ejector. Movement of all those parts is independently but synchronously controlled by cams in the stationary receiver of the gun.
Starting with the gun unloaded and the barrel locked by the breech block, the loading and firing sequence is as follows: when the charging handle is pulled, the barrel group is pulled rearwards; this causes a stud on the breechblock to follow a cam path cut in the right receiver sideplate. During this rearward movement, the breechblock is first raised up, and on the end of the stroke then dropped down, and the breech is exposed for loading. Upon completion of the rearward cycle, the cocking handle is released and the barrel group goes forward under the power of the return spring. The breech block initially remains lowered, while its controlling stud follows the lower part of the cam track; at the same time, first a special feed rammer pushes the bottom cartridge from the magazine to the right, and into the channel cut in the upper part of the breechblock; then, a fork-shaped bottom extension of the feed arm strikes the projection in receiver, so the upper part of the arm is sent forward with greater speed, feeding the cartridge on the breechblock forward and into the chamber. As soon as the cartridge is chambered, the breech block rises to a position in line with the barrel, is locked rigidly and the gun is then ready to shoot. When the operator pulls the trigger, it releases the hammer which, via a linkage, strikes the firing pin and discharges the gun. Recoil forces the barrel back against the return spring. Upon recoil, the stud on the breechblock follows the upper part of the cam track and first lifts the breechblock above the bore axis. As soon as breechblock is raised, a separate extractor / ejector propels the cartridge case from the chamber and out of the gun, through the aperture at the bottom of the receiver. At the end of the recoil stroke, the stud on the bolt follows the descending part of the cam track, lowering the breechblock below the bore axis and preparing the gun for the loading of the next round. The loading cycle continues as described above, and if the trigger is still held back and the mode selector is set to automatic fire, the gun will fire automatically as soon as the counter-recoil / loading cycle is complete.
The ammunition feed is from top-mounted curved box magazines; early guns had single stack magazines better adapted to rimmed ammunition, while some late-production guns were provided with double-stack, single-position feed magazines. Madsen light machine gun magazines are somewhat unusual as their feed position is offset to the side of the magazine, because the magazine is offset to the left of the gun axis. This is necessary for the oscillating feed arm, which is located to the left of the breechblock, to be able to pick up fresh cartridges and send them up to the chamber above the dropped breechblock. Depending on the version and caliber, the magazine capacity usually varied between 25 and 40 rounds, although 30-round magazines were probably the most common.
Ejection is to the bottom, through an aperture in front of the trigger guard. This aperture is fitted with a dust cover which is opened before firing by swinging it down and rearwards.
The firing system consists of a conventional trigger which operates an internal hammer, and a manual safety / fire selector switch, located on the left side of receiver, above and in front of the trigger guard.
Standard furniture includes a wooden butt and a folding bipod, attached to the barrel jacket. A variety of folding carrying handles was provided on some versions of the gun. Additional accessories also included rear monopod, which was installed under the butt, and a variety of infantry and AA tripods and mountings. Unlike most MGs with top-mounted magazines, the Madsen does not require offset sights as the magazine is offset, away from the sight line.