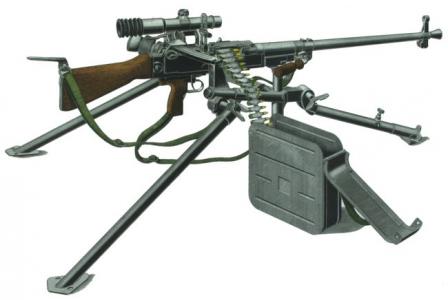 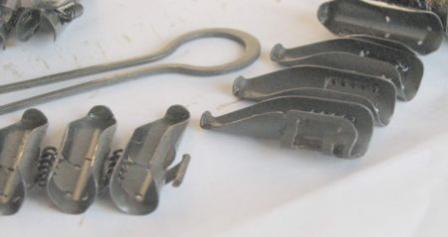 The  Vzor 59, also known as Rachot (UK Vz.59, Universal Machinegun model of 1959) was developed in Czechoslovakia by state-owned Zbrojovka Vsetin arms factory in mid to late 1950s as a further developmment of the Vz 52 and Vz 52/57 light machine guns. At the present time, UK 59 is a standard universal MG of the Czech and Slovak armies, and it also was widely sold for export. Production of the original UK 59 is now complete.

UK 59 is a true universal machine gun, chambered for powerful (but obsolete) rifle cartridge, Russian 7.62x54mm R. It is available in two basic versions: UK 59L – a light machine gun with lightweight barrel and bipod, and UK 59, with heavier and longer barrel and tripod mount. Gun can be reconfigured from light to medium configuration in the matter of seconds, with replacement of the barrel and mounting or dismounting it onto / from tripod. Standard tripod is used against the ground targets, with additional AA adapter also available.

UK 59 is a gas operated, belt fed machine gun. It uses underballel gas piston that operates the bolt carrier with tilting bolt, that locks into the receiver. Despite the fact that UK 59 used the obsolete rimmed ammunition, it employs the straight feed, when cartridge is feed straight forward from the belt pocket and into the chamber. To achieve this, UK 59 uses non-disentegrating 50 rounds metallic belt with open cartridge pockets. 50-round belts can be connected one to another to form continuous belts up to 250 rounds for medium MG role. In LMG role, 50 rounds belts are loaded into containers, whch could be clamped to the right side of the receiver. UK 68, chambered for 7.62mm NATO, on the other hand, uses NATO-standard desintegrating belts. UK 59 fires from the open bolt, and features quick detachable barrels, of heavy and light patterns. Light barrels are some 103 mm shorter and have permanently attached folding bipods. Both types of barrels feature conical muzzle flash hiders. UK 59 has no conventional cocking handle. Instead, pistol handle with trigger unit is used to cock the gun. To do so, one must press the button on the receiver and then, while pressing the trigger, cycle the pistol handle forward and then back. Safety lever is located at the left side of the receiver.