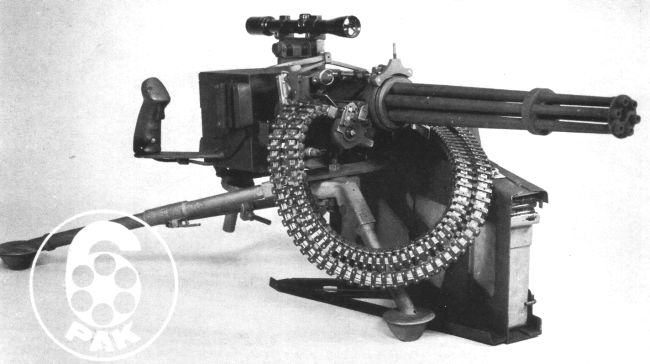 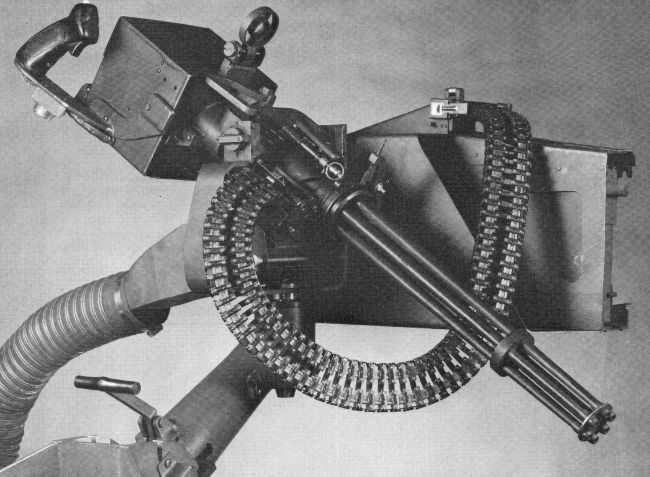 The XM-214 'Microgun' / '6-pak' Gatling-type machine gun was developed by General Electric Corporation during mid- to late 1970s in an attempt to produce smallest practical machine gun with extremely high rates of fire. It was based on the sucessfull 7.62x51mm M134 Minigun weapon, developed earlier by the same company. The key roles for XM-214 Microgun were installation onboard of the smaller helicopters, military ground vehicles (as an anti-ambush weapon) and on infantry tripods (for possible use as base defense or ambush weapons). To fit these roles, the XM-214 was incorporated into the so called "6-pak" system, a self-contained weapon that consisted of the gun, firing motor, rechargeable battery (good for some 3,000 rounds of continuous fire), electronic control box and mount, and special ammunition containers that held 1,000 rounds in belt. Theoretically, this system was man-portable (total weight in combat ready position with 1,000 rounds of ammo was 38.6 kg / 85 lbs), but in practice 6-pak / Microgun system was too underpowered and lacked effective range for airborne or AA applications, and had excessive rate of fire for most infantry applications. Furthermore, the need for battery power severely limited use of the weapon in the field, because electrical batteries have tendency to fail or exhaust at most inconvenient moments. All in all, it appears than no seroious orders ever came for XM-214, depsite its wide promotion, and during late 1990s GE quietly removed '6-pak' from its catalogs. The idea of firing the XM214 off-hand (Hollywood-style) apparently was  never pursued in practice; the average recoil force of the XM-214 was about 45 kg / 99 lbs, with peak recoil being closer to 100 kg / 220 lbs, all at 4,000 rounds per minute.

The XM214 Microgun is an externally operated weapon which uses electrical motor drive to operate its action. Standard electric motor has power of roughly 0.6 kWt at 4,000 rounds per minute. The gun operates on Gatling principle, that is it employs a rotary cluster of six barrels, each with its own bolt group. Bolts are moved back and forth behind each barrel as their operating roller passes an internal curved track machined inside the receiver cover. Typically, the topmost barrel in the cluster has its bolt fully open and the bottom barrel in cluster has its bolt fully closed, locked and firing pin released to fire the loaded cartridge. Barrel locking is achieved by the rotary bolt head. Since the gun operates on external power, it is immune to dud / misfired rounds, which are ejected during the normal cycle of operation. Feed is provided either by linked ammunition, through the flexible chute. To properly operate the gun, it is fitted with electronics control box, which contans the battery, 'master arm' switch and fire controls (triggers). Typical feed arrangement uses a two 500-rounds containers, connected to feed swicth which automatically switches over to full container once another one is empty; this (at least in theory) allows for continuous fire, as the empty container can be replaced when gun still feeds and fires from another container.