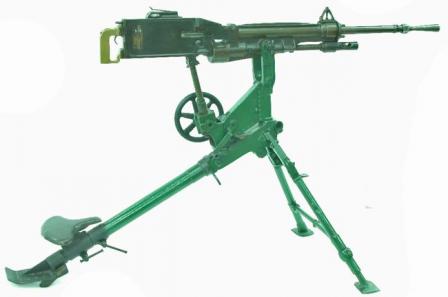 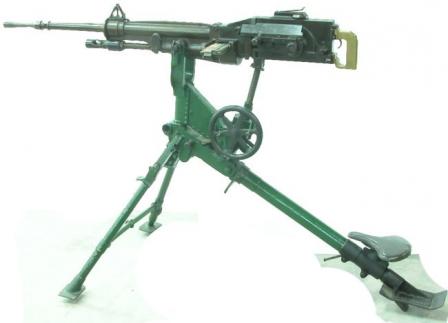 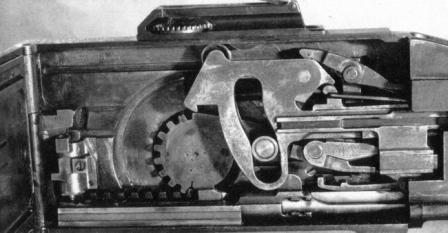 The St.Etienne M1907 machine gun was developed circa 1906 by the state-owned arms factory Manufacture d’Armes de Saint-Etienne in adesperate attempt to improve on the miserable Puteaux M1905 machine gun. The problematic Bang-type gas system was replaced by a  slightly more conventional system, which used a gas port drilled about the middle of the barrel, and the return spring was placed below the barrel, around the gas piston rod. Still, the “improved” weapon retained the extremely complex and hardly reliable operating and locking system of the Puteaux gun. Despite of all its shortcomings, and availability of a much better domestic weapon, the Hotchkiss, this gun served with French army until the latter parts of the WW1, and later saw some more action in French colonies.

Inthe St.Etienne the gas piston is blown forward to operate the action,as opposed to most other designs in which the gas piston goes backwards. The large gas cylinder, which is located below the barrel,is fitted with an adjustment valve, and an additional adjustable buffer is built into the receiver. This permits the shooter to adjust the rate of fire from about 30 to 600 rounds per minute, although the actual value tended to depend on how much the gun was worn, and how hot it became from previous shooting. The finned barrel radiator of the M1905 gun was replaced by plain brass jacket of heavy construction, which enclosed the rear part of the barrel past the gas block.The strip feed system was retained from M1905 machine gun, although at least a few guns were modified circa 1916 to accept cloth belts.M1907 machine guns also employed an “improved” sighting system, which consists of a drum-adjustable rear sight (with range settings up to 2,500 meters), and a front sight with a built-in automatic compensator for the change of trajectories caused by barrel heating. The St.Etienne machine guns were used either from M1907 tripods of from later M1916 tripods.