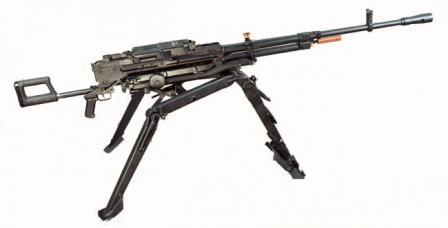 The fall of the Soviet Union in 1991 left some military factories located outside Russia; worse still, some of these factories were the primary makers of certain weapon types, such as the 12.7mm NSV and NSVT heavy machine guns. The “Metallist” factory that made these guns for the Soviet army remained in the now-independent Kazakhstan, and it kept all master drawings and other manufacturing documentation for this important weapon. It was therefore decided to take the opportunity to develop an improved HMG for use both by infantry and on vehicles (mostly tanks), and this task was handed over to the designers of the Degtyarov plant (ZID, the former Degtyarovmachine gun factory ) in the city of Kovrov.
The new 12.7mm weapon was to retain same mounting interfaces as NSV, while providing better long-range accuracy. The ZID team did not have to start from the ground up – actually, the factory’s design team had been working on an improved 12.7mm HMG since 1987 – but the fall of the USSR delayed its development. The new Russian Army requirement allowed them to shake the dust from their older design drawings, and while development was rather slow (because of the constant lack of funding),the finalized gun was adopted by the Russian Army in 1997 and put into mass production in 2001. Known as “KORD”(Konstruktsija ORuzheinikov-Degtyarovtsev – design of Degtyarov plant team), or under the official index 6P50, this weapon is now issued to infantry troops and is mounted on most modern Russiantanks, such as the T-80U and T-90. Because it uses the same firing and mounting interface, KORD can be also retrofitted to older tanks (i.e.T-64 and T-72), to replace worn-out NSVT weapons. One unusual feature of the KORD is its relatively low recoil,which allows it to be used not only from the same lightweight tripod or AA mounts as the NSV,but also from a proprietary "bipod" mount 6T19, creating what could be called a lightweight heavy MG. In this configuration the KORD weighs‘only’ 31kg, thus allowing it to be carried on the battlefield by a single soldier, although obviously for short distancesonly. This makes the KORD very useful during ‘limited warfare’ operations in urban and forest environments, as theHMG team can change positions almost as fast as the infantry it supports, and is able to fire from almost anywhere, including the highstories of urban buildings (through the windows) or even from the rooftops.

The Kord heavy machine gun is a gas operated, air cooled, belt feed, automatic only, weapon. It uses a more or less conventional long stroke gas piston, located below the barrel which is locked using a rotary bolt with multiple lugs. The barrel is quick-detachable and is fitted with highly effective muzzle brake. There are two basic patterns of muzzle brakes – early cylindrical one and current “flat” muzzle brake /flash hider
The belt feed uses the same steel,non-disintegrating belts as the NSV.The standard feed direction is from the right, but the Kord can be setup to feed from the left if required. Spent cases are ejected forward through a short tube pinned to the right side of the receiver.
Likethe NSV, the Kord has no firing controls on the gun body, other than a firing lever and mechanical safety. Actual fire controls and charging mechanisms, be that a manual trigger with pistol grip and manual charging handle, or an electric solenoid trigger and pneumatic or electrical charging system, are installed on the mount. The Kord retains the same mounting interface as the NSV, so it is used from the same infantry tripods 6T7,AA mounts 6U6 or tank mountings. Because of reduced recoil (compared with the NSV or other 12.7mm HMGs, thanks to the effective muzzle brake and buffers)the Kord is equipped with one rather unique mounting 6T19, which consists of a standard gun cradle of the NSV tripod (with pistol grip,charging mechanism and shoulder stock), with attached bipod legs.
The Kord has iron sights as standard (hooded front post and tangent rear),plus a special rail on the left side of receiver, which can accept mountings for variety of telescopic or infrared sights.