Browning BAR M1922 – the light machine gun for US Cavalry.

Browning BAR M1918A1, with its spiked bipod and hinged buttplate.

Browning BAR M1918A2, the final and most popular version. Often was used with bipod removed. 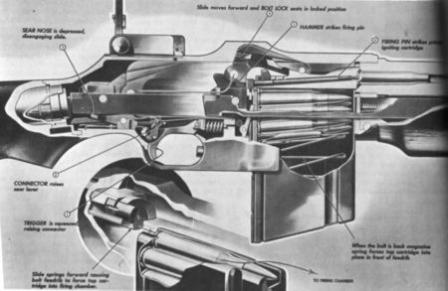 The cut-out drawing of the Browning BAR M1918. Showing its bolt locking and feeding system.

The Browning Automatic Rifle was designed by the famous American arms designer John Moses Browning. It was invented late in the First World War, upon a request from the US Expeditionary corps in Europe. Initially it was just that – an Automatic Rifle, a selective fire weapon intended for use by infantry to fire from the shoulder or from the hip when advancing onto enemy positions. Also to provide mobile firepower to every squad, since the standard machine guns of the period were heavy and much less maneuverable.

However, the BAR M1918 proved way too heavy for a shoulder fired weapon. It was more than two times heavier than the bolt-action Springfield M1903 rifle and exactly twice as heavy as the  M1 Garand semiautomatic rifle. On the other hand, it was too light to be easily controllable in full automatic mode, especially firing such a powerful round from a shouldered, unsupported position.

Anyway, the M1918, made by the Colt Firearms co. were issued to some US troops by the end of the war. After WW1, the development of the BAR continued. In 1922, the US Cavalry adopted the M1922 light machine gun. It featured a folding bipod under the partially ribbed barrel, a removable monopod “third leg” under the butt, and  M1917 machine gun sights. The Colt company also produced a lightened semi-automatic version of the BAR, called a Colt model 75 “Monitor” rifle. This was intended mostly for police use, but found its way into the hands of outlaws too.

During the 1930’s, the next version of the BAR was briefly manufactured, designated as M1918A1. This gun featured skid-footed folding bipods, attached to the gasblock. The butt was also fitted with a hinged steel buttplate.

In 1939, the final American version of the BAR appeared, under the designation of M1918A2. This version, manufactured by Colt, Marlin-Rockwell, and Winchester, served in the Squad Automatic Weapon role with US troops during the Second World War and later in the Korean War. Many of the earlier M1918A1 guns were converted to  M1918A2 configuration, which featured a skid-footed adjustable bipod under the flash hider, M1917 sights, a smaller forend and a metal heat shield between the barrel and cylinder/spring. Single shot mode was  replaced by two selectable full auto modes, with fast (~650 rpm) and slow (~450 rpm) rates of fire to choose from. The bipod, however, was somewhat awkward, uncomfortable and heavy. Many M1918A2’s were used with the bipod removed.

The BAR also found its way into many European armies. Browning sold his design to the famous Belgian company Fabrique Nationale. From this source, in more or less modified form, the BAR served with Poland, Sweden, Belgium, the Baltic states and so on. The ultimate BAR version only appeared after WW2, when FN introduced its BAR Type D light machine gun. This gun had a quick detachable barrel and the return spring was moved into the butt.

This gun had seen not too much service, being adopted only by the Belgian army prior to the switch to the smaller 7.62mm NATO cartridge. There were numerous attempts in the USA to convert the BAR for this new ammunition, but the design was poorly suited to modern manufacturing. So with the adoption of the new NATO round as standard ammunition, the US army was left temporarily without its Squad Automatic weapon. Until in 1982, the M249SAW (FN Minimi light machine gun) was introduced into service.

It must be noted that while being technically a very good design (typical for Browning’s genius), BAR was not too successful in either the Automatic Rifle and LMG role. For an Automatic Rifle it was too heavy and too difficult to control in full auto. For the LMG role, it lacked the magazine capacity and the necessary quick replaceable barrel required for sustained fire. This left it inferior in those terms to the pre-WW2 LMG’s like the British BREN, Soviet Degtyarov DP-27 and so forth.

The BAR M1918 is a gas operated, magazine fed, air cooled weapon. It utilised a gas piston located under the barrel. The bolt had a tilting locking lug, that was raised to lock into the roof of the receiver. This lug was linked to the operating rod via a swinging link, much as in the earlier Berthier system. The BAR always fired from the open bolt to avoid cook-offs. The return spring was located around the gas piston under the barrel, so it was prone to overheating and lost its temper during prolonged firing sessions, resulting in jams and stoppages. This issue was somewhat cured in the M1918A1 with the introduction of the heat shield between the barrel and the spring, located inside the forend.

The receiver was a machined piece of steel, and the gun was fed from detachable 20 round box magazines. The barrel was fitted with flash hiders of different types, and, since the M1818A1, the wooden buttstock was also fitted with a hinged buttplate. The latter production models of M1918A2 were also fitted with a carrying handle.

The buttstocks and forends were mostly made from wood, but on late production M1918A2’s furniture was sometimes made of plastic.