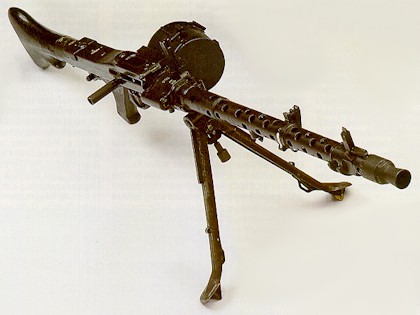 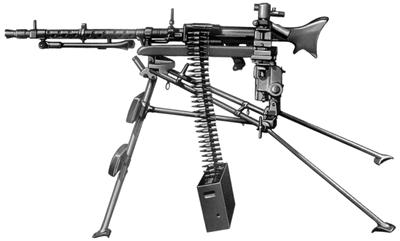 MG-34, closeup view on the receiver. 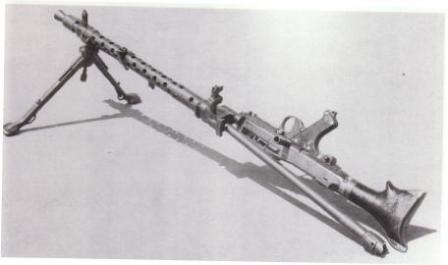 MG-34, barrel change; see how receiver is swung out to the right.

MG-34 is rightly famous as the world’s first Universal machine gun. That is,  it could be used in any of the range of MG roles. As a light machine gun it could be fired from a bipod, a medium machine gun to provide sustained fire from a tripod, or as a tank / vehicle or AA gun. Maschinengewehr-34 (Machine gun, model of 1934), or MG-34, was the main infantry support weapon of the Wehrmacht (Hitlers’ German armed forces) during the first half of World War 2.

MG-34 was designed in the early 1930’s by a team led by Louis Stange at Rheinmetall, the leading German arms manufacturer at that time. The final design, adopted for service in 1934, incorporated numerous features from experimental prototypes built by Rheinmetall, Mauser-werke, and others.

It was put into production circa 1935, and remained an official MG of the Wehrmacht until 1942, when it was oficially replaced by the more reliable and cheap to produce MG-42.

The MG-34 is a recoil-operated, select fire weapon. It utilises a short recoiling barrel with a muzzle recoil booster also serving as a flash hider. Barrel locking is achieved by a rotating bolt head, with interrupted threads locking lugs, that lock into the barrel extension. Bolt head has a set of rollers, located just behind the lugs. These rollers are used to rotate bolt heads to lock and unlock, when riding inside the curved grooves, cut on the inner walls of the receiver. Rollers also act as a bolt accelerator, when bolt unlocks, due to inter operation with the barrel extension. Tubular receiver is linked to the tubular barrel sleeve by the swinging stud, set at the right side of the receiver, so receiver can be turned up and to the right relatively tho the barrel sleeve, thus exposing the barrel rear end. When receiver is opened, barrel can be simply withdrawn from its sleeve to the back, but when barrel is hot, this requires some sort of the heat protection, so MG-34 operator had to use asbestos glove which was a standard acessory to the gun. MG-34 usually was issued with belt feed, which was operated by the stud on the top of the bolt body. Belt feed could be easily set up to take the belt from the left or from the right side of the gun. With special replacement feed cover, a double-drum, saddle-type 75 rounds magazines can be used. MG-34 was a selective fire weapon, with mode of fire being controlled by dual trigger. A pull on the upper part of the trigger produced single shots, while a pull on the lower part produced full auto bursts.

Being an universal MG, MG-34 could be used in different configurations. As a light MG, it was used from light, folding bipods, which could be set up either under the muzzle or under the guns’ center of gravity, allowing for better stability or better field of fire, respectively. In this mode MG-34 was usually fed from 50-rounds truncated-cone belt boxes, made of tin. Belt boxes were cillped to the receiver and allowed the gun to be carried loaded withouth dangers of belt being jammed.

In sustained fire role, MG-34 was mounted on the special tripod of very complicated and expensive design, called Lafette-34. This tripod allowed for direct or indirect fire missions, and was equipped with recoil dampers, special fire control unit and an optical scope mount. With the use of the special adapter, this tripod also can be used for antiaircraft role. For dedicated air-defence missions a special, lightweight AA tripod was also available.

As a tank gun, MG-34 was equipped with heavier barrel and armoured barrel jacket withouth the vent holes.

In general, MG-34 was an outstanding weapon, with wery fine finish and made to tight tolerances, but this become also its biggest drawback – being too expensive and too slow to manufacture, MG-34 was less than suitable for mass wartime production. It also was somewhat sensitive to dirt and fouling, a standard atrribute of the western front battles. But the most major advantage of the MG-34 was its versatility, and it set the trend for numerous latter designs.