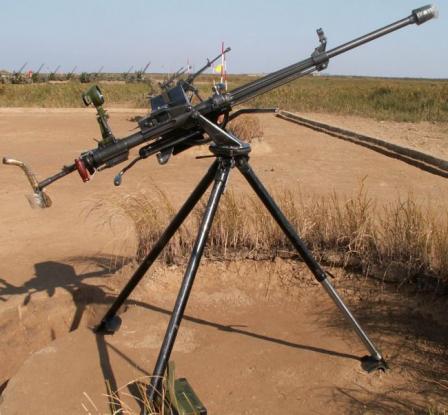 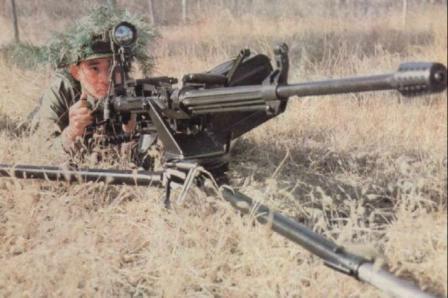 During the mid-1970s PLA (Chinese army) has decided to develop a lighter 12,7mm weapon, suitable for mobile AA applications, from ground and vehicle mounts, as well as for ground troopssupport, which shall replace a geing 12,7mm Type 54 (Copy of Soviet DShKM)heavy machine guns. The new weapon was officially adopted by the PLA in 1977 as the 12,7mm Type 77 HMG; its mass production commenced in 1980. This weapon had a somewhat unusual (for a machine gun) direct impingement gas operated action, apparently in attempt to save on the weight of the moving parts. Its basic locking system and belt feed were adaptations of the proven DShKM solutions, and the entire gun with a universal tripod weighs some 56 kilograms – less than half that of the Type 54 /DShKM on its mount. The Type 77 HMG has a very heavy barrel with a prominent muzzle brake, and a slender, tubular receiver. The Type 77 was usually issued with low-magnification optical sight, suitable for both anti-air and ground applications. It seems, however, that this gun left something to be desired, as just five years after its entrance into service it was replaced in production by a newer weapon, known as the 12.7mm Type 85 heavy machine gun.

The Type 77 heavy machine gun is a gas operated, air cooled, belt fed weapon that fires from an open bolt and in automatic mode only. It has a very slim, tubular receiver machined from steel, and uses a direct-impingement gas system with no separate gas piston. The powder gases are fed from the gas block through a three-position gas regulator, which is located at the middle of the barrel, and are then fed through the gas tube to the receiver, where they strike the bolt carrier. The locking system is based on the Degtyarov / Kjellman system, with two pivoting locking flaps located at either side of the bolt.The barrel is quick-removable and is fitted with the carrying handle. The front of the barrel is fitted with a large, cylindrical muzzle brake.
The belt feed module is based on that of the Soviet DShKM/ Chinese Type 54 system, and is operated through the oscillating arm by the projection on the bolt carrier. Feed is from the left side only. The feed system uses DShKM-type belts with open pockets and single-stage, push-through feeding. The belt box can be attached to the weapon to provide better mobility.
Controls include dual spade grips and thumb-triggers; the charging handle is located below the receiver.The gun is usually issued on a universal tripod, which can be used for both ground and AA missions. This has an adjustable-length front leg, which is retracted for low-profile “anti-ground” use, or extended for AA missions, for which it can be fitted with special shoulder stock, made from steel tubing. The Type 77 is fitted with fully adjustable open sights, plus it has provisions for mounting various telescopic, night vision and special AA sights.