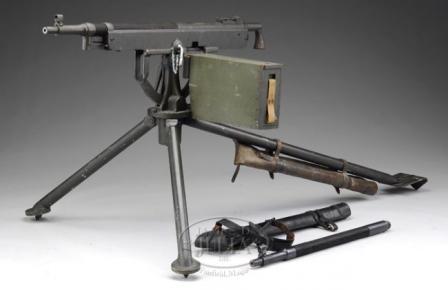 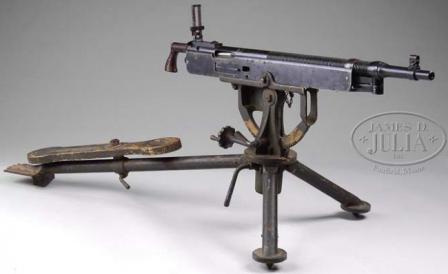 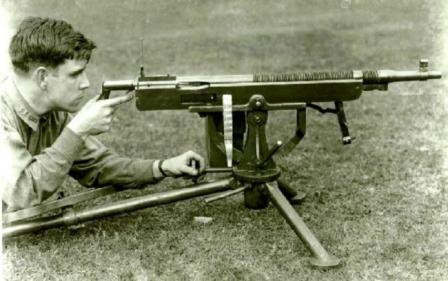 The first domestically designed machine gun appeared in the USA in 1895. It was the Colt M1895 machine gun, developed by gun genius John Moses Browning between 1891 and 1895. It was known as a “potato digger” for its peculiar down-swinging arm driven by a gas piston. The US Navy adopted this gun circa 1896 in its contemporary 6mm Lee Navy(.234) cartridge, and a little later the US Army bought some guns chambered for the Army’s .30-40 Krag cartridge. The M1895 was made inlimited numbers and saw some action during the US-Spanish war of 1898,along with older manually operated Gatling guns. It was also sold for export, most notably to Imperial Russia, which in 1914 ordered significant numbers of M1895’s in its 7.62x54R caliber.

Colt Model 1895 machine gun (at the time it was not publicly associated with the name of its inventor, John Moses Browning) was gas operated, belt fed, air cooled automatic weapon.It used a heavy, fixed barrel and an unusual gas system with swinging gas piston. In this system, the gas piston was located below the barrel at the right angle to the bore, and upon discharge it was blown by the powder gases down and to the rear, pivoting on the long lever attached to the barrel behind the port. This piston lever was connected to the bolt by the set of struts and levers, which transferred radial movement of the piston to the linear movement of the bolt. This system, while requiring sufficient clearance below the gun to operate (otherwise the gun would literally dug into the ground, thus earning the name of“potato digger”), also resulted in slow initial movement of the bolt,assisting positive extraction (feature later lost in Marlin conversions of 1917 / 1918). Barrel locking was achieved by tipping the rear part of the bolt down, into the recess in the receiver floor.Firing was from closed bolt, using internal striker (hammer) with linear movement. Firing controls include single pistol grip at the rear of receiver, and a rifle-type trigger.Feed was using cloth belts, from left side only. Belt traction module was of simple design, utilizing single sprocket wheel operated by the levers connected to gas piston. Cartridges were withdrawn from the beltto the rear prior to loading into the barrel; spent cases were ejected to the right via aperture in receiver.Standard mounting was tripod of solid design, with elevation and traverse mechanisms.

Modifications:
Colt Model 1914:Commercial version of the original M1895, chambered in .30-06 US ammunition (for domestic use, mostly as Army training gun) or in .303British and 7,62x54R as supplied to Britain and Imperial Russia. Key difference was the detachable barrel with multiple radial fins. Many guns of this type were shipped to Allied forces during WW1. It was also produced by Marlin.

Marlin M1917,M1918:tank and aircraft machine guns, produced by Marlin Arms Corp. Key modifications from basic design were adoption of the linear gas piston, running in parallel to the barrel and below it, along with addition with an aluminum radiator. Most Marlin guns saw action as aircraft machine guns.