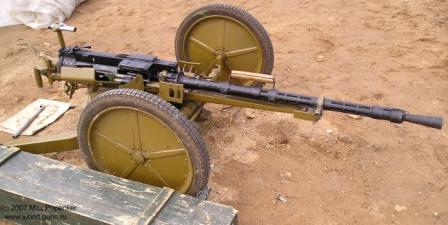 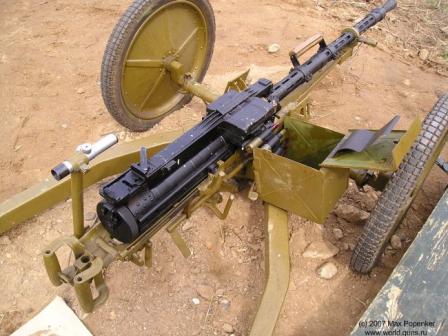 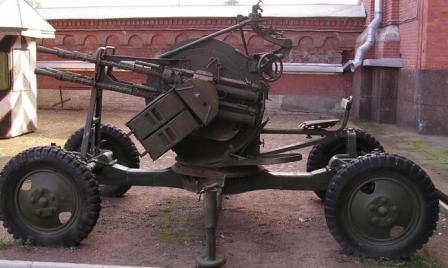 The KPV (Krubnokalibernyj Pulemet Vladimirova– Vladimirov large calibre / heavy machine gun) was born during WW2 from numerous requests from the Soviet fighting troops, who wanted a heavy MG firing the extra-powerful 14.5×114 armor-piercing ammunition developed for anti-tank rifles. Such extra-heavy MGs could be useful against German light tanks and armored personnel carriers, aswell as against reinforced machine gun nests and other such targets.This also could make a formidable short range AA weapon. Development ofthe new heavy machine gun commenced in 1942, and the first working prototypes of the KPV were built by 1944. Following the trials and much refinement work it was adopted in 1949 in an infantry version (on a wheeled mount) and in three towed AA mountings (single,twin and quad). Later on, its ‘tank’ version was used as the primary armament of some armored reconnaissance and personnel carrier vehicles such as BRDM and BTR-70. In the AA role, KPV guns saw considerable action in the hands of the North Vietnamese armed forces, supplied from the USSR and China as military aid (China has produced copies of KPV as 14,5mm Type 56 heavy machine gun). Later on,AA mounts with KPVT guns were used by the Soviet Army in Afghanistan,to fire up at Mujaheddin hiding in the mountains and firing at Soviet bases and convoys from above.
The KPV entered mass production in about 1950, in infantry (ground-fire only) version with a wheeled mount designed by Kharykin, and in a number of dedicated AA mounts;single, twin and quadruple. In the 1955 the heavy Kharykin mount was replaced in production by a lighter tripod designed by Baryshev. Guns produced prior to 1955 retained their wheeled mounts and both version saw significant use during the Soviet invasion of Afghanistan. The infantry version of this gun had a relatively short production life,being replaced by the improved KPVT (tank) version, which is used forboth armored vehicles and dedicated AA mounts, as well as in naval mounts for light patrol vessels.

It must be noted that until very recently (when Chinese have introduced their indigenous 14,5×115 heavy machine gun)  KPVT was the most powerful heavy machine gun in its class, providing almost double muzzle energy compared to 12,7mm / .50 caliber weapons. With muzzle velocities of about 1000 – 1030 meters per second and AP bullets weighting 60 gram, it generated muzzle energy of about 32,000 Joules and penetrated some 32mm of steel armor at500 meters range and about 20mm at 1000 meters.

The Vladimirov KPV is a short-recoil operated, locked breech, air cooled, belt fed weapon.Bolt to barrel locking is achieved by the rotating bolt collar that hasa set of interrupted thread lugs on its inner surface. These lugs engage cuts made on the breech of the barrel. Barrels can be quickly replaced along with perforated barrel jackets. The carrying handle is attached to the barrel jacket. The bolt collar is rotated upon recoil by the cross-pin that follows the cam track. The firing pin is permanently fixed to the bolt face and can strike the primer of the cartridge only when bolt is completely locked to the barrel.
The KPV is fed using disintegrating steel belts. The feed is of the two-stage type, with the cartridges first being pulled back out of thebelt, then placed into a T-slot cut in the breech face. Spent cases are first pushed down and out of the T-slot by a fresh cartridge, and then either fall down through the ejection opening (on original infantry guns) or are ejected forward through the short tube (on modern KPVTguns). The final spent case is pushed out of the bolt slot by a special ejector lever. Belt feed direction can be easily adjusted for left- or right-side feeding.
The original infantry mount, designed by Kharanin, was more or less like a small artillery mount, with two large steel wheels with rubber tires, and dual tail booms used to tow the HMG behind a jeep or light truck, and to steady it in the firing position. Baryshev type tripods were significantly lighter, and infantry KPV guns were most often used at fixed checkpoints or incorporated into base defenses. Various AA type mounts included lightweight“mountain” ones with single guns, and heavier towed twin and quadruple mounts which had traverse and elevation mechanisms plus special sighting equipment and were usually manned by two operators and a number of loaders / assistants.

Modifications.
KPVT(tank) is the current version of the basic design, used for vehicle installations and various AA mountings. It has a shortened receiver,which is a great bonus for guns that are mounted inside compact tank orAPC turrets. KPVT also have heavier barrel jackets and use 50-roundbelts instead of the original 40-round ones. KPVT HMG’s arethe primary armament of the Soviet BTR-60B and BTR-70 armored personnel carriers and BRDM armored recon vehicles.