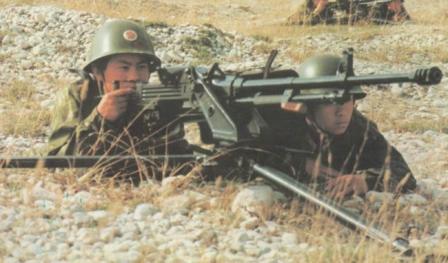 The W-85 heavy machine gun at the first glance looks much like the Type 77heavy machine gun, but closer examination reveals certain differences, such as very thick gas tube below the barrel (which conceals a conventional gas piston, as opposed to piston-less system of the Type 77 and Type 85), and the receiver is of generally rectangular cross-section, while the receivers of the Type 77 and Type 85 are more or less of tubular design. It is believed that the W-85 was built in parallel with the Type 85 HMG, most probably on a competitive basis, but lost in the PLA trials. Apparently, it survived as a commercial venture, as available information suggests that the NORINCO Corporation sold for export at least some armored vehicles armed with a “W-85 12.5mm machine gun”. Recently, information has surfaced in Chinese publications about the “new” 12.7mm QJC 88 tank machine gun, which looks exactly like the tank version of W-85.

The W-85 heavy machine gun is a gas operated, air cooled, belt-fed, automatic only weapon. Its design is loosely based on the Soviet DShKM / Chinese Type 54 heavy machine gun, although there are many differences in various subsystems.
The W-85 uses a long-stroke gas piston, located below the barrel. The piston is rigidly attached to the bolt carrier, which carries a compact breech block (bolt). The locking system can be described as an “inverted” Degtyarov / Kjellman flap lock; it uses two pivoting flaps, one at either side of the bolt, to engage cuts in the receiver walls. The key difference between the W-85 and DShKM is that, in the W-85, the flaps are pivoted at the rear and have special locking projections that lock into the receiver walls.
The feed is also broadly based on that of the DShKM, and the feed module is a detachable unit, attached to the top of the receiver. It is operated by a swinging arm which projects down at the right side of the feed. The fork-shaped bottom end of the arm engages a reciprocating charging handle, which is attached to the bolt carrier. Feed is from the left side.
The gun fires from an open bolt, in automatic mode only. The firing pin is operated by a projection on the bolt carrier; the same projection forces the locking lugs outwards so the gun cannot fire unless the bolt is fully locked. A manual trigger is fitted to the rear of the receiver,and dual spade grips provide firing controls. W-85 can be installed either on universal tripod, or on vehicle (tank) mounts.