MG 13 with box magazine, left side.

MG 13 with box magazine, right side. 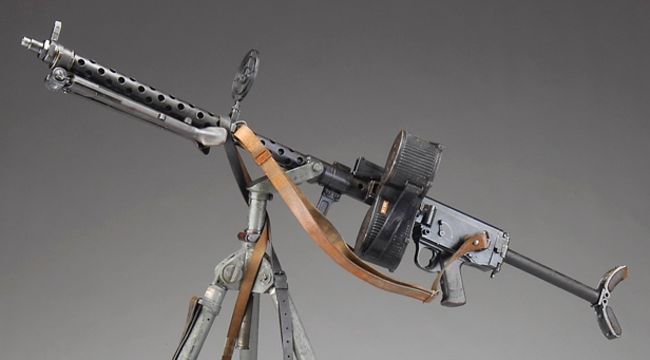 In parallel with the work carried out in Switzerland (this work resulted in development of the Steyr-Solothurn S2-200, also known as MG 30 in Austrian service or 31M in Hungarian service), during late twenties and early thirties German arms-making concern Rheinmetall continued domestic developments based on WW1-era designs. By the early 1930s Rheinmetall had modified the 1918 pattern “Dreyse” LMG into a magazine fed, light machine gun which was known as Gerat 13 (device 13). Developed in the light of recommendations from German Army experts, this weapon was thoroughly tested and officially adopted by Wehrmacht as MG 13 in 1932. The MG 13 designation was selected as a disguise, in an attempt to represent a newly developed weapon as an older (1913 pattern) model in the eyes of Allied Control Commission which enforced the Versailles treaty. For a short time the MG 13 became the core of German infantry squad. Initially it was issued with a 25-round curved box magazine, but later on a special 75-round twin drum (Doppeltrommel 13) was developed to provide more sustained firepower, especially for AA missions. This double drum was based on, but not interchangeable with, the similar double-drum magazine developed for Luftwaffe’s MG 15 machine gun, which was widely used on German aircraft as an observer’s weapon.

The MG 13 is a short-recoil operated, magazine fed, air-cooled light machine gun. The barrel of the gun can be withdrawn and replaced, but this requires partial disassembly of the gun, as the barrel is withdrawn through the rear of the opened receiver along with its extension and bolt. Locking is achieved by a swinging lever located at the bottom rear part of the barrel extension, just behind the bolt. When in battery, the front arm of the locking lever supports the bolt from behind, locking it in place; unlocking is resisted by a shelf in the receiver, which does not allow the locking lever to swing down. Upon discharge, the barrel, its extension, bolt and locking lever recoil for a short distance. After that short recoil, the front arm of the lever leaves its supporting shelf in the receiver and the rear arm of the lever strikes the cam in the receiver, swinging the front arm down and out of the path of the bolt. A lever-type accelerator is located in the receiver; it acts upon the base of the charging handle to increase the speed of the bolt.
The receiver is relatively short, with top and bottom covers hinged from it. The top cover contains the return spring; opening it automatically disengages the spring from the bolt group. The bottom cover hosts the trigger unit and backplate with an attached shoulder stock.
The MG 13 fires from a closed bolt, using an internal hammer. The trigger is of the rocking type, it allows for single shots and full automatic fire. The selection of the fire mode is made by pressing either the top (single shots) or bottom (automatic) part of the trigger. A manual safety is located at the left side of the receiver, above and behind the pistol grip.
The MG 13 uses only magazine feed. Magazines were inserted from the left side, and the magazine housing has a spring-loaded dust cover. Spent cases are ejected through the opening in the right receiver wall. The original magazines were of the curved box type, holding 25 cartridges in two rows. Box magazines can be refilled using standard 5-round stripper clips. Later on, double drum magazines were developed. These magazines have two drums, with cartridges fed alternatively from each drum. These Double drum (Doppeltrommel in German nomenclature) magazines were different from MG 15 / MG 34 magazines, as the “upper” drum was located asymmetrically relative to “lower” drum, so it would not block the line of sight on MG 13. Double drum magazines were rather expensive and heavy, and notoriously hard to load.
The MG 13 was issued with a detachable bipod of adjustable height. The barrel jacket has two attaching points for a bipod – one near the muzzle and another near the receiver. The shoulder stock is made of steel with leather recoil pads. To save length, the shoulder stock can be folded forward and to the right. The gun can be fired regardless of the position of the stock, as it folds below the ejection port. A carrying handle is provided at the front of the receiver.