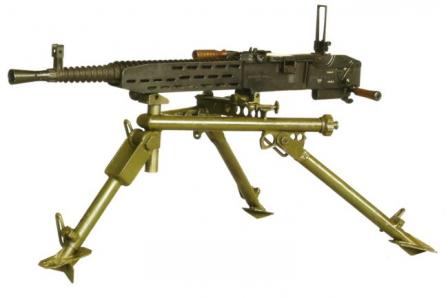 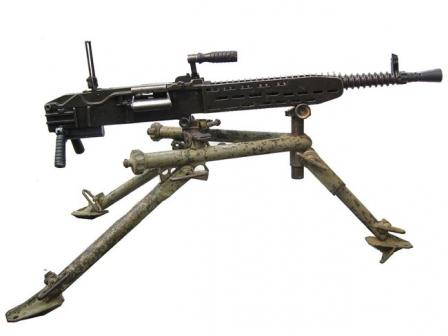 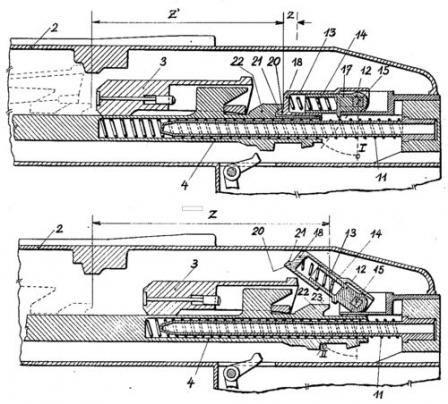 ZB 53 / Vz.37 machine gun, diagram explaining the switch on / switch off bolt buffer which, when switched on, affected the rate of fire by speeding the gun up for additional 200-300 rounds per minute.

Despite numerous attempts of Czechoslovak arms industry to produce more modern medium machine guns, no suitable weapon to replace the obsolete Schwarzlose appeared until the mid-1930s. This was the 7.92mm ZB53, developed in Brno by the Holek brothers. Development of this machine gun commenced in 1930, and it was a private venture by the ZB factory, without any sponsorship from the Army. The goal was to design and produce a belt-fed medium machine gun with dual rates of fire (the lower rate for ground targets and the higher for anti-aircraft work) and good sustained fire capabilities. The first prototypes were built using water-cooling, but by 1932 a new, air-cooled and recoil-operated weapon was submitted to Czechoslovak army trials under the factory designation ZB50.Trials proved that the ZB50 was not reliable enough, especially when set to its higher rate of fire, so work continued on a new, gas operated weapon. An intermediate design, the ZB52, appeared in 1933, and the next year saw the appearance of the further improved ZB53 medium machine gun.
In 1935 the Czechoslovak army bought 500 ZB53 medium machine guns for extended trials, designating these the Vz.35 (Model of 1935). After extensive use, the Army requested a number of improvements, and finally adopted the new machine gun for service in 1937 as the Vz.37. In the same year the British company Birmingham Small Arms (BSA) Ltd obtained a license for the tank version of the ZB53, to produce these guns for the British Royal Tank Corps under the name of BESA, in the same 7.92x57caliber. Like its “little brother” ZB26, the ZB53 was also widely exported. Buyers of this weapon included China, Iran, Rumania and Yugoslavia, as well as a number of other European and South American countries. It is worthy of note that about two thirds of the entire production of the ZB53 was exported, as the Czechoslovak army showed little interest in medium machine guns, most probably because of a lack of funds. Production of the ZB53 continued under Germany occupation during 1939-41, and it was incorporated into German small arms nomenclature as the MG 37(t).

The ZB53 is a gas operated, air-cooled, belt fed, selective fire, weapon that fires from an open bolt. The barrel is heavily finned and can be changed quickly to provide sustained firepower. It is fitted with a conical flash hider and a carrying handle.
The action of the gun is a gas-operated system with a long-stroke gas piston located below the barrel. The gas block is fitted with a four-position gas regulator. Locking is similar to that of ZB26 – the rear end of breech-block is raised to engage a locking shoulder made in the roof of the receiver. Tipping of the breech-block is controlled by a cam-shaped projection and cuts made on the bolt carrier / gas piston extension. The action of the ZB53 is unusual in two ways. First, it has a rate-of-fire regulator in the form of a spring-loaded buffer which can be set in the path of the recoiling bolt group or brought out of action by switching a lever located at the left side of the receiver. When the buffer is out of action (swung up and out of the way of the bolt group), the bolt group can recoil the full distance back, which results in a longer operating cycle and a lower cyclic rate of fire. Once the buffer is lowered, it limits the recoil path of the bolt group, and the buffer spring uses the energy of the recoiling bolt to send it forward faster than usual, thus resulting in an increased rate of fire. The second unusual feature of the gun is that the receiver, which houses the barrel, gas drive and bolt group, is permitted to recoil within the outer housing of the weapon, against its own return spring. This spring is located above the receiver, just behind the feed unit. This buffered system is designed to decrease the vibration and peak recoil transferred to the mounting, particularly since the gun fires just before the recoiling mass returns to battery, which softens the recoil blow.
The ZB53 uses belt feed, from non-disintegrating steel belts which are fed from the right side only. The feed is of the single-stage, push-through type.
The trigger unit is mounted in a separate housing below the receiver, which also serves as the cocking mechanism. It houses a sear system, a thumb trigger (which also serves as a safety and fire mode selector), and dual folding grips. To cock the weapon, a release lever is pressed, and the entire trigger housing is slid forward. Once the bolt carrier is engaged by the sear, the trigger unit is pulled back until it is locked in its rearward position. The trigger is of round shape, and has a radial projection which serves as a safety and fire modeselector (gun can fire either single shots or bursts). The dual grips can be folded vertically for compact storage, or set horizontally, or turned further down at approximately45o, to better suit the firing position or the preferences of the shooter. The grips are also used to cycle the trigger unit and thus cock the gun.
Standard sights are of open type, with an adjustable rear sight mounted on the receiver and front sight mounted on the barrel. Ring-type AA sights and telescopic sights were available as options.
The ZB53 was issued with tripods of several designs, but all were made to the same high standards as the weapon itself and, again like the weapon, were rather complicated and expensive to make, although comfortable to use. The tripods were adjustable for height, so the gunner could adopt a prone or sitting position, or could provide high-angle AA fire.

Modifications:
Besa: a licensed modification of the vehicle (tank) version of the ZB53, made by Birmingham Small Arms Ltd in the UK and used on several British tanks.