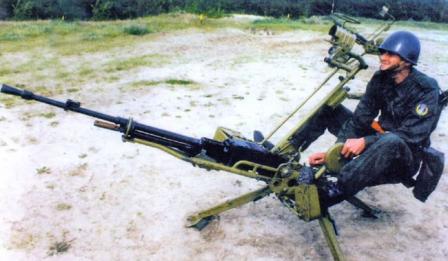 The venerable 12.7mm DShKM heavy machine gun served well into the 1960s, but it was far too heavy for manoeuver warfare, and proved to be insufficiently accurate over longer ranges. Therefore, a new requirement was drawn up for an improved 12.7mm HMG, which could be used as an infantry support weapon (on atripod), as a tank defensive weapon (cupola-mounted) or as ashort-range AA weapon (on dedicated mounts). Development of a newweapon was initiated in 1969, and in 1972 the Soviet Army adopted thedesign by Nikitin, Sokolov and Volkov. Known as the NSV-12.7, thisweapon is also known as “Utjos” (cliff; the original codename of the development program). This weapon was significantlylighter than the DShKM (especially in itsinfantry support configuration – on a tripod and with 50 roundsin a belt the NSV weighed some 100 kg less than the DShKM on its wheeled mount with the same amount of ammunition), as well as more accurate and better suited for contemporary production techniques.The NSV quickly replaced the DShKM onSoviet tanks, as well as with infantry units as a heavy support weapon and in certain non-infantry units as a short-range AA weapon (ondedicated low-profile AA mounts).

The NSV heavy machine gun is a gas operated, air cooled, belt fed, automatic only, weapon which fires from an open bolt.
Thegas system consists of a gas chamber, located below the barrel, with a gas regulator and a long-stroke gas piston attached to the boltcarrier. The barrel can be quickly replaced in the field during sustained fire. The receiver is of generally rectangular shape,and is assembled from heavy gauge steel stampings and machined inserts with many rivets. Bolt locking is achieved by lateral displacement of the entire bolt to the left side, until its locking lugs are engaged with locking recesses cut in the insert attached to the receiver wall.The bolt is linked to the bolt carrier with swinging links which control the longitinual and lateral movement of the bolt and, once the bolt is in battery and fully locked, strikes the firing pin to discharge the gun. The bolt carrier has several anti-friction roller swhich ride on the tracks cut in the receiver. The rear of the receiver houses a spring buffer for the bolt group.
The NSV uses non-disintegrating steel belts with open links; feed is of the single-stage type. Belts are assembled from 10-round pieces, using a cartridge as an interlink. The standard belt feed unit feeds from the right side, but any NSV gun can be set up for alternative left-side feed. The belt indexing mechanism is built into the feed cover, which swings up and forward for loading and unloading. Spent cartridges are ejected forward through a short tube, located to the right of the barrel. The firing mechanism of the NSV consists of a trigger lever with the necessary linkage to the sear, and a mechanical safety. Firing controls must be built into the mount, in the form of a pistol grip on the cradle of the infantry tripod, or a firing solenoid in the cradle of the tank mount.
The standard mounting is either an infantry tripod, adjustable for height and intended for ground fire only, or a low-profile AA mount with mechanical traverse and elevation mechanisms and special sighting equipment. The infantry tripod can be folded down and carried by the soldier as a backpack using special slings. This tripod also houses a foldable shoulder rest (with a spring recoil buffer), a pistol grip with trigger, and a gun charging mechanism. This consists of a steel cable with a T-grip, wound on a spring-loaded drum,with a gear and toothed rack that connects to the bolt carrier once the gun is properly installed on its cradle in the tripod.
In infantry configuration, two soldiers can move the NSV across the battlefield;the same two soldiers can carry the NSV for longer ranges if the gun is dismounted from the tripod. One soldier then carries the tripod as a backpack, while the other carries the gun body. Each man also carriesone ammunition can with a belt.
Standard sighting equipment for infantry NSV guns is the SPP selectable power telescopic sight (3X or6X), with an illuminated range-finding reticle. Each gun is also fitted with back-up iron sights.

Modifications.
NSVT(Tank) is basically similar to the NSV except for the special mounting.NSVT machine guns are used mostly as roof-mounted AA / self-defense weapons on Soviet and Russian main battle tanks. The special tank mount has a buffered cradle, electrical (solenoid-operated) trigger, traverse and elevation mechanisms and a special collimating sight.