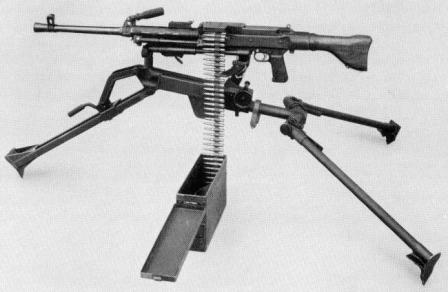 In around 1955, following the successful testing of the prototype SIG assault rifle which used a retarded-blowback action, SIG engineers began development of a universal machine gun using the same principles. The basic design was derived from German MG 42V / MG 45 machine gun, but rollers were replaced by swinging flaps with rounded locking surfaces. The first SIG prototype, known as the MG 55, looked much like German MG 45, although the Swiss weapon was made to much higher standards. The MG 55 retained the MG 42 / MG 45-style barrel changing procedure, and in the following years SIG designers tried a variety of other barrel change systems, which, along with other minor changes, led to a series of prototypes, known as the MG 57-1, MG 57-2, and, eventually, SIG MG 710, which appeared in 1960. This gun was ready for production, and a few were made in 6.5×55 Swedishcaliber for export; gun was also advertised in a number of other contemporary chamberings such as 7,92×57. Later on, SIG produced a similar weapon in 7.92×57, which was designated SIG MG 710-2, but this also was only made in very limited numbers. This one had different barrel change procedure andthus featured a shrt, tubular barrel jacket. In 1965 SIG presented the latest and most successful weapon of the MG 710 line – the SIG MG 710-3, chambered in 7.62×51 NATO ammunition only. It was somewhat different from previous weapons of the same series, as it featured a different barrel change system. This machine gun was sold in significant numbers to several South American and African countries.It must be noted that Swiss army never used SIG 710 machine guns, being entirely happy with 7,5×55 MG 51 machine guns.

The SIG MG 710 (also often referred to as the SIG model 710 or simply SIG 710) is an air-cooled, belt fed, retarded-blowback operated machine gun. The barrel is stationary but can be easily replaced through the opening in the right side of the relatively short barrel jacket. The barrel is fitted with a special handle on the right side which is used to remove hot barrels from the gun.
The locking system is based on the SIG Stgw.57 assault rifle, which, in turn, is an evolution of WW2-era German designs, either the Mauser Stg 45(M) or Grossfuss MG 45. The bolt group consists of two parts, a lighter head and a heavier body, with a pair of delaying levers inserted at either side at the front of the group. When in battery, the levers are engaged with cuts made in the barrel extension. Upon firing, gas pressure, via the base of the cartridge, pushes the bolt head back, and levers provide a mechanical disadvantage by accelerating the heavier bolt body. The system is so timed that the levers leave their recesses in barrel extension as soon as the bullet leaves the bore and pressure in barrel drops to safe levels. From this moment on, the bolt group is free to recoil under its accumulated inertia to complete the reloading cycle. To provide more reliable extraction, the chamber has several longitudinal flutes to allow some gas to "float" the case from the chamber walls.
The feed system uses non-disintegrating steel belts with open pockets. Feed is of the single-stage, push-through type, the belt being pulled from the left side only.The SIG MG 710 fires from an open bolt and the trigger unit permits automatic fire only.
In the light machine gun role the SIG MG 710 is used from an integral, folding bipod that is attached to the barrel jacket. In the medium role it can be used from a universal tripod, made by SIG. Early SIG MG 710-3 guns were fitted with wooden buttstocks; late production guns were made with tubular metallic butts.