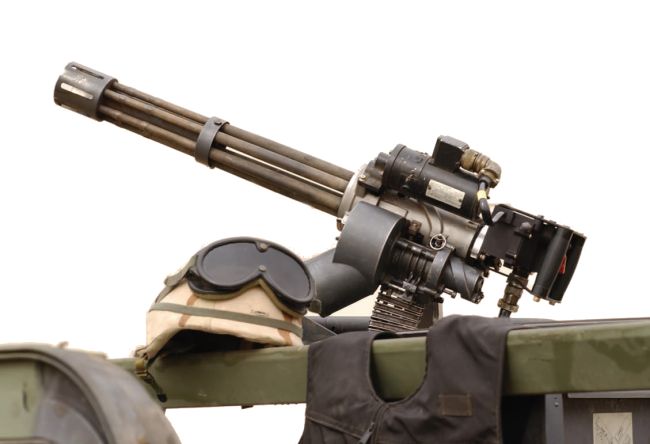 M134D Minigun of current manufacture, mounted on the roof of the military car.
Image: Dillon Aero 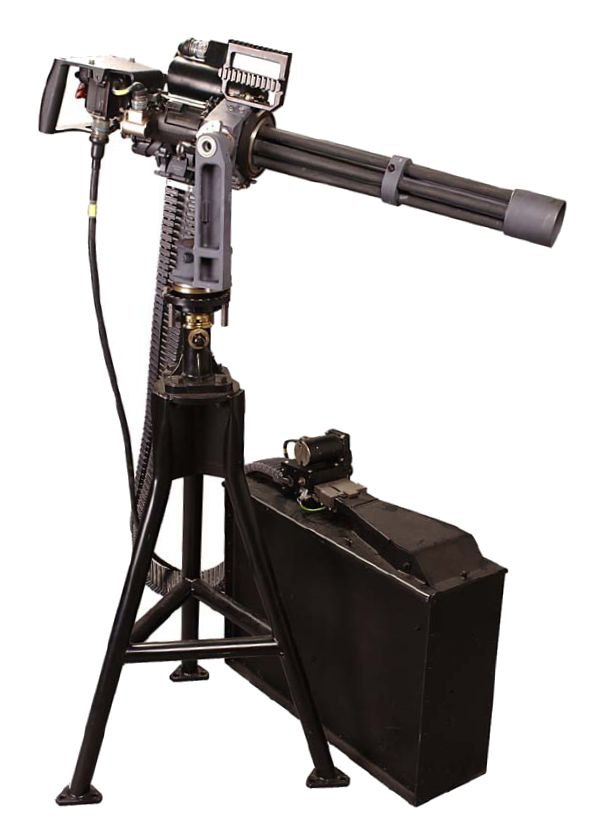 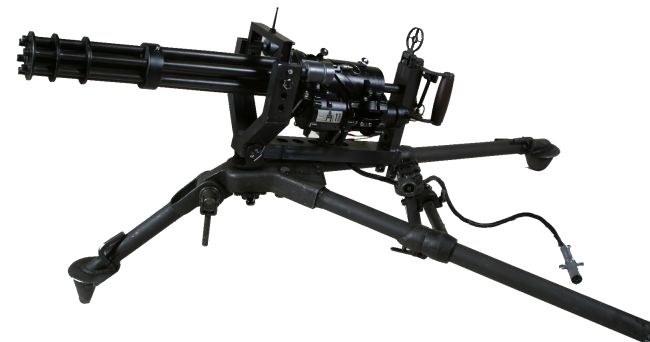 The development of a rifle-caliber, externally powered Gatling type machine gun was commenced by weapons branch of the US-based General Electric Corporation in 1960, following the successful development and fielding of the 20mm M61 Vulcan automatic gun (used in aircraft and AA applications). First prototypes of the 7.62mm Gatling-type machine gun were fired in 1962, and in late 1964 first 7.62mm machine guns, dubbed 'the Minigun', were mounted on AC-47 Gunship aircraft for combat trials. Following the definitive success of the first 'Gunship' aircrafts armed with Miniguns, GE commenced mass production of the new weapon, officially adopted by US Army as M134 Minigun and by US Air Forces as GAU-2/A machine gun. By 1971 more than 10,000 Miniguns were produced and delivered to US Armed forces. Most were used in airborne applications, installed in a variety of side- or forward-firing mountings aboard aircrafts and helicopters (AH-1 Cobra, UH-1 Huey, HH-53 Green Giant and others). Some Miniguns also were installed on riverine crafts, used by US Navy and Special forces in Vietnam.Thanks to its sustained-fire capability and high rate of fire, Minigun weapons provided excellent suppressive and area denial capabilities. It must be noted, however, that infantry applications of the Miniguns were very limited due to the weight of the system and its requirement for external electric power. In most cases, Minigun machine guns were (and still are) mounted on high mobility vehicles as anti-ambush weapons.
In recent times, production of the 7.62mm Miniguns was resumed by US-based company Dillon Aero, which is now manufacturing an improved version of the basic design, known as M134D. It has many upgrades in detail, resulting in decreased weight of the system (especially when using titanium gun body), improved reliability and better handling and maintenance. The M134D machine gun is used on board of many military helicopters (such as MH-6 or UH-60), as well as on HMMMV trucks and naval crafts (to provide close-in defense against small, fast-moving vessels such as suicide-bomber motorboats).
It must be noted that M134 miniguns are very rarely used for infantry applications; photos of M134 installed on standard light tripods are almost universally from some 'Civilian' events such as Knob Creek shot in USA, where people can fire a number of legally owned full automatic weapons just for fun. Military has no place for a 30-kg weapon (less mount and batteries) with extremely high ammunition consumption rate in a 'man-portable' class of small arms. Prospects of using M134 in 'Hollywood-style' are even less realistic, not only because of aforementioned properties (heavy weight and unnecessarily high rate of fire) but also due to the extremely high recoil force – at just 3,000 rounds per minute the Dillon Aero M134D minigun generates average recoil force of 150 lbs / 67.5 kg, with peak recoil reaching 300 lbs / 135 kg.

The M134 Minigun is an externally operated weapon which uses electrical motor drive to operate its action. Typical power requirements for 3,000 rounds per minute (50 rounds/second) rate of fire are 24-28 V DC, 58 Amp (~1.5 KWt); with increase of rate of fire power requirements rise accordingly. The gun operates on Gatling principle, that is it employs a rotary cluster of six barrels, each with its own bolt group. Bolts are moved back and forth behind each barrel as their operating roller passes an internal curved track machined inside the receiver cover. Typically, the topmost barrel in the cluster has its bolt fully open and the bottom barrel in cluster has its bolt fully closed, locked and firing pin released to fire the loaded cartridge. Barrel locking is achieved by the rotary bolt head. Since the gun operates on external power, it is immune to dud / misfired rounds, which are ejected during the normal cycle of operation. Feed is provided either by linkless chute or by the linked ammunition, In the latter case, a powered feeder/delinker module is installed on the gun; it receives necessary power through the gear from the gun motor. To properly operate the gun, it is fitted with electronics control box, which, in the case of manually controlled installation, has an 'master arm' switch and fire controls (triggers). Typical feed arrangement uses a large container holding some 1,500 (full weight ~ 125 lbs / 58 kg) to 4,500(full weight ~ 295 lbs / 134 kg) rounds, with maximum capacity reaching well over 10,000 rounds per gun in certain heavy helicopter installations (such as used in CH-53 and CH-47 during Vietnam war). The container is connected to the gun via the flexible chute. If chute is overly long, an additional electrical feed booster is installed on the ammunition container.