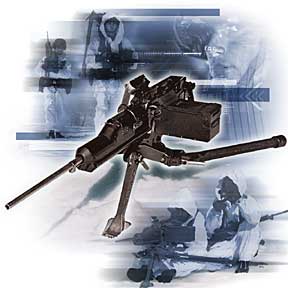 The original plans to replace obsolete, but numerous .50 caliber (12.7mm) Browning M2HB heavy machine guns in the US service listed the 25mm Xm307 OCSW weapon as a successor to the 80+ years old Browning. But the present delays in the development of the highly expensive and sophisticated OCSW led to the conclusion that the US Forces do need something new, and at least as effective as old "Ma Deuce" (M2HB) right now. So in 2000 US military requested for the lightweight, .50 caliber machine gun to supplement old M2HB until the arrival ofthe much more effective 25mm XM307 OCSW system, which will be capable of firing 25mm explosive shells with great accuracy and lethality. The described version of the XM312 "lightweight heavy machine gun" (sounds weird, huh?) is being developed by the General Dynamics, a huge US-based defense company. TheXM312 is based on the 25mm XM307, but without its comprehensive and expensive explosive ammo and fire control it is much cheaper and could be finalized much faster. It is entirely possible that XM312 will enter limited service with US military before 2005, while XM307 OCSW is scheduled for much later date.

The XM312 will be one of the lightest (if not lightest of all) .50 caliber (12.7mm)machine guns on the market. This advantage, which will made it two-men portable,comes at the cost of decreased cyclic rate of fire, which is more than 2 timeslower, than on other .50 caliber guns. This will made this gun strictly anti-ground weapon, because this low rate of fire will made it ineffective againstfast-moving targets like helicopters and low-flying aircrafts. The practical rate of fire, however, is quoted to be no less than of M2HB, around 40 rounds per minute. XM312 also should be no less (if not more) accurate than the M2HB.

Technical description.
The design of the XM312 is based on the recoil-reducing action, developed for 25mm XM307 OCSW.The barrel is locked by the conventional rotating bolt, which is operated by more or less conventional gas system. The bolt group mover within the barrel extension, which, along with the barrel and gas system, can recoil inside the gun housing. The XM312 fires from the open bolt, and at the moment of fire the recoiling group (barrel, barrel extension, gas system and gas drive) is in its rearmost position. When gun is fired, special spring first begin to move recoiling group forward. Then, bolt is released, it strips the cartridge into the barrel, locks it and cartridge is fired, while recoiling group is still on the move forward. So, the recoil of the shot first had to overcome the inertia of the recoiling group, and only then group began to recoil back, compressing the return spring. At the same time gas drive unlocks the bolt, and retracts it within the barrel extension, extracting and ejecting a fired case. This somewhat complicated design results in significantly reduced recoil, and in conjunction with muzzle brake, in lightweight, but stable construction. The price of this reduction in recoil is complicated (and expensive) construction and low cyclic rate of fire. The feed is using same old metallic belts, and XM312 can be fed from either side, alternatively.