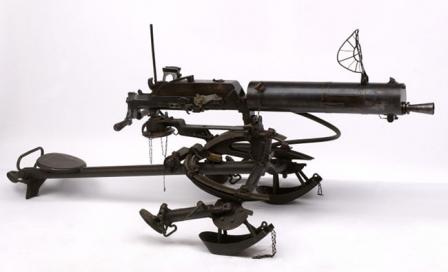 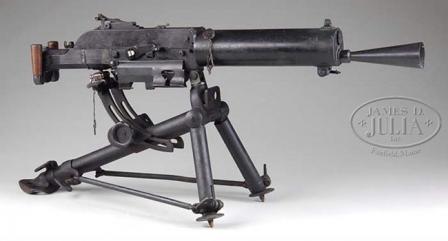 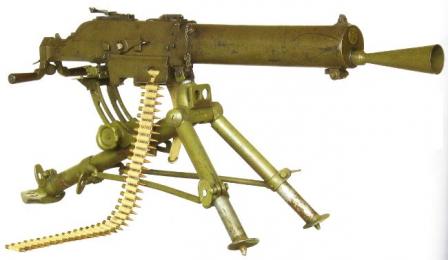 German arms designer Andreas Wilhelm Schwarzlose patented a basic design for a machine gun in 1902. He subsequently sold his patent rights to the Steyr arms factory in Austria, which produced the first guns of the Schwarzlose pattern in 1905. After two years of trials and development, the military forces of the Empire adopted the Schwarzlose machine gun in 1907; this gun was also later adopted in a range of calibers by the Netherlands and Sweden (who both manufactured Schwarzlose machine guns under licence until the 1930s), and by Greece, Serbia, Romania, Bulgaria and Turkey – all before the World War I. In 1912 it was modified with the introduction of stronger parts and slightly reshaped retarding levers (struts). The primary visible difference between original M1907 guns and modified M1907/12 guns is the lack of the gap between the hump on the receiver and the barrel jacket on the latter guns.
After the WWI and the fall of the Austro-Hungarian Empire, a great many Schwarzlose guns were adopted by smaller countries that emerged from the remains of the Empire, such as Czechoslovakia (which put the gun into production) and Hungary. Many Schwarzlose guns also went to Italy as war reparations, and subsequently saw some use during WW2, mostly in Africa in the original 8x50R caliber. Another user of Schwarzlose machine guns was Russia, which captured several thousands of Austrian machine guns during the early parts of World War One.
The Schwarzlose machine gun, although overshadowed by more famous weapons such as the Maxim or Browning, has its own merits. It is quite simple in construction, robust in service, and usually quite reliable. Its drawbacks come from its basic design, which centers on a retarded-blowback action. This action calls for a relatively short barrel so that the chamber pressure drops before the case begins to leave the chamber; otherwise it would rupture – although when the Czechoslovak army converted their old 8x50R Schwarzlose machine guns to the more powerful 7.92×57 Mauser ammunition, they had no problems associated with high pressure, even with new, significantly longer barrels. Nevertheless, most of the Schwarzlose guns retained short barrels throughout their service life. This obviously limited the muzzle velocity and thus the maximum range and possible bullet penetration at any given range, compared with contemporary guns with a locked breech. The short barrel also called for a dedicated flash hider, to suppress the significant muzzle flash which otherwise would blind the gunner at night. Finally, the lack of primary extraction required an integral oiler, which squirted a small amount of oil into the chamber just before chambering the next round. Nevertheless, the Schwarzlose was a good weapon and saw considerable use through both world wars, although during the Second World War it was mostly relegated to second-line troops, fortifications and other such uses.

The Schwarzlose machine gun is a retarded-blowback operated, water cooled, belt-fed weapon that fires from a closed bolt. The method of operation requires a heavy breechblock, connected to the receiver through a pair of knee-joint struts. When the bolt is in battery, the struts are folded forward, with their joint axis lying relatively low above the barrel axis. Upon firing, the pressure of the powder gases acts on the breechblock through the base of the cartridge case. The rearward movement of the breechblock unfolds the struts, but because of a carefully arranged redirection of forces through the struts and joints, most of the initial pressure is transferred to the receiver. Upon further recoil, joint axis rises above the barrel, and thus the recoil force is re-distributed with more and more of it being used for bolt acceleration. Upon recoil, the bolt compresses a massive and powerful return spring which forces it forward and into battery once the recoil stroke is completed. The charging handle is attached to the axis of the forward strut, and has to be rotated back to cycle the bolt.
Due to the lack of primary extraction, the Schwarzlose has to use oiled cartridges. To avoid the problems associated with factory-oiled or waxed ammunition (which tends to collect fine dust and then cause jams) the gun has an internal oiling system which squirts a small amount of oil into the chamber just before the chambering of each round. This system includes an oil reservoir, located in the receiver’s top cover, and a small oil pump, which is operated by the reciprocating bolt.
The belt feed system is very simple, and involves few parts. The major part is the star-wheel, located in the lower left corner of receiver. Upon bolt recoil, the star-wheel is rotated for one step by the interaction of the cam surfaces on the bolt and the wheel. Each cartridge has to make three steps in the feed before being presented to the bolt for chambering, therefore initial belt loading requires three deliberate pulls on the charging handle. The feed direction is from the right side only, ejection being to the left.
The trigger system also is of rather simply design. It involves a separate striker, a striker spring and a sear, mounted on the bolt. The sear is cocked by a lever attached to the rear bolt delaying strut, and this cocking movement adds to the retarding force applied to the bolt. After cocking the striker is held to the rear by the sear. The thumb trigger is located at the rear of the receiver, and once pushed by the operator, it holds the connection bar so it trips the sear when the bolt is in battery. A manual safety is located next to the trigger and blocks it unless pushed forward by the operator’s left thumb. Dual spade grips are located horizontally at either side of the receiver, and can be folded up for storage or transportation.
The most common mounting was a tripod of solid construction, with tubular legs of adjustable height and traverse and elevation mechanisms. An optional armored shield was available for this gun, which was unusual in that it also provided frontal and lateral armored protection for the thin metal of the water jacket. Alternatively, a low-height, lightweight tripod was provided for the “light” role. This tripod had no traverse and elevation mechanisms.