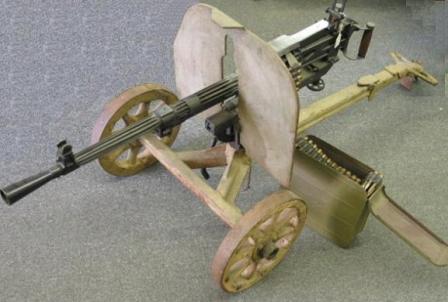 View on the receiver and belt feed of the SGM (top cover is opened).

The Red (Russian) army entered the World War 2 having an outdated and almost obsolete Maxim M1910 machine guns as a main heavy (mounted) machine guns. Very small numbers of the DS-39 adopted in 1939, were quite unsatisfactory, so in 1942 an official request was issued for new heavy machine gun of standard rifle caliber. New machine gun had to be used from ground mounts, AA mounts or vehicle mounts, and be capable of using either a canvas belts from older Maxim guns or a new metallic belts.Development of the new MG was started in the may of 1942, and it was developed by the team lead by the P.M.Goryunov at the Kovrov Machinegun plant. Less than one year later new machine gun had been sent for army trials to the front, and in the may of 1943 this weapon was adopted as a "7.62mm mounted machine gun system Gorjunov", or SG-43 in short. After the end of the WW2, SG-43 was modernised several times, became the SGM. It was also available as a tank gun (SGMT) with electric trigger, or as the armoured cars gun (SGMB) with special mountings. It was used by the Soviet Army until mid-1960s, when it was gradually replaced by the first Russian universal machine gun, PK (PKS). SGM was widely exported to Soviet-friendly countries and regimes, and also manufactured in some countries like China.

SG-43 is a gas operated, belt fed, automatic weapon. It uses gas drive with long piston stroke, located under the barrel. Barrel lock is achieved by side-swinging bolt that locks into the wall of the receiver. Barrel is quick-changeable. On the SG-43 barrels had plain external appearance. On the early SGM guns, barrels had radial cooling fins, and on the latter SGM guns barrels were logitinually fluted to save weight and improove air cooling. SG and SGM machine guns used a belt feed with non-desintegrating links. Due to rimmed ammunition, the feed process was commited in two stages: first, a fresh cartridge was extracted from the belt to the rear and lowered ahead of the blot, and then, on second stage, fresh cartridge was fed into the chamber. Fire control unit included a set of spade grips attached to the rear of the receiver, a safety switch and a push-button like trigger. On the SG-43 the charging handle was located at the rear of the receiver, under the spade grips; on the SGM, it was relocated to the right side of the receiver.

Both SG-43 and SGM guns could be mounted on the universal wheeled mount, designed by the Degtyarev. This mount allowed for both ground and anti-aircraft roles. Early mounts were equipped by the steel shield, but it was latter omitted due to marginal protection and heavy weight. SGM machine guns also could be seen on the more modern tripod mountings.