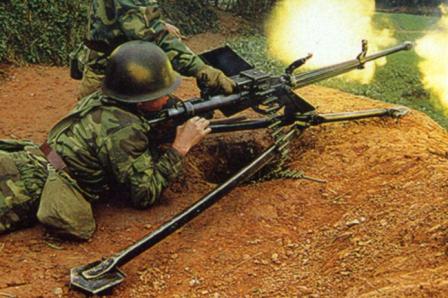 The Type 85 heavy machine gun can be considered as a further evolution of the Type 77heavy machine gun– most of the improvements concentrated at either end of the basic weapon. The Type 85, like its predecessor, was also used as aground and vehicle weapon.It is currently in service with PLA, along with earlier  Type 77.Recently, China has disclosed an export version of the Type 85 machine gun, known as W95. This gun is similar to Type 85 except that it ischambered for 12,7×99 NATO / .50BMG ammunition.

The Type 85 heavy machine gun is broadly based on the Type 77,but with certain improvements. It uses the same direct-impingement gas system with flap-locking bolt; the belt feed system also is similar tothe Type 77. The key difference between the Type85 and its predecessor is in the arrangement of the trigger and cocking system, which is patterned after the pre-WW2 Czechoslovak ZB 53 / vz.37 machine gun. The trigger module of the Type 85 machine gun is a separate unit which is attached below the receiver and can slide forward and back. To cock the bolt (as the gun fires from anopen bolt) one must release the trigger unit lock, then push the trigger unit forward using horizontal spade grips which are attached tothe unit. Once the trigger unit is its forward position, its sear engages the bolt, so retraction of the trigger unit causes the boltgroup to unlock and go rearwards. Once the trigger group is fully retracted, it is locked in place by its own lock, and holds the bolt in a cocked position until the trigger is released.
The Type 85 heavy machine gun is fitted with open sights and has mountings for telescopic, night or special AA sights; it is used either from special vehicle mounts, or from a special lightweight infantry tripod. It is also normally fitted with a tubular shoulder stock.