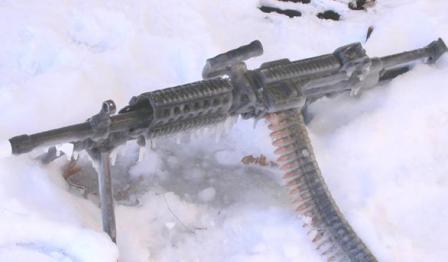 The Mk.48 mod. 0 7.62mm LWMG (Lightweight Machine gun) is being developed by the FN Manufacturing Inc. (an US-based outfit of famous Belgian company FN Herstal). The request for new weapon came in 2001, and the first units in the US Special Operations Forces are scheduled to receive this machine guns in august, 2003. The Mk.48 mod. 0 is due to replace infamous 7.62mm Mk.43 mod.0 (M60E4) machine guns, which are quoted as insufficiently reliable. US SOCOM plans are to acquire several hundreds of Mk.48 mod. 0 LWMGs.It also probably will be offered for export by FN Mfg when the initial US Govt contract will be completed.

The key advantages of the Mk.48 mod. 0 over the 7.62mm M240 /FN MAG are the light weight (essential for SpecOps, 17% lighter than M240B),parts compatibility with M240 and Mk.46 mod. 0, and a rail mounting system, that can be fitted with various sights and SOPMOD kit accessories.The Mk.48 mod. 0 will provide several firepower advantages (in both terminal effectiveness and range) over the Mk.46 mod. 0 and M249 SAW,being much lighter than M240 and much reliable than Mk.43 mod. 0 (M60E4).

Technical description.
The Mk.48 mod. 0 is a gas operated, air cooled, belt fed machine gun. Its actionis very similar to one of M249 / Minimi, being a gas operated, with underbarrel gas system and a rotating bolt locking. Gun is fedusing standard disintegrating 7.62mm belts (no magazine feed is available, as on the smaller Mk.46 mod.0). Belt can be fed from separate boxes or clip-on combat pouches for 100 rounds. Barrel is quick-detachable and has a carrying handle to assist replacement of the hot barrels. Mk.48 mod. 0 isfitted with open sights, and has  5 Picatinny rails (one on the top of the receiver, 4 on the for end), that can accept wide variety of sights and accessories.Mk.48 mod. 0 is fitted with solid, non-folding plastic butt, folding integral bipod, and a carrying sling. It seems that it also can be mounted on vehicles and infantry tripods for sustained or long range fire missions.