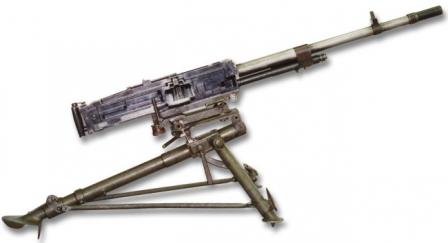 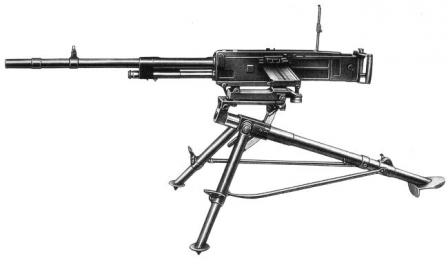 Loaded 20-round cartridge 'cassette' or strip for the Breda M1937 machine gun.

During early 1930s the Italian army decided that the 6.5mm ammunition lacked the range and striking power desirable in a medium machine gun. A series of trials was organized to select an improved round of ammunition, which cumulated in the adoption of the 8×59 M35 cartridge, also known as the 8mm Breda. This was a powerful round, which outclassed the 6.5×52 M91 by a wide margin. Interestingly enough, the first gun to be chambered for this round was the heavily modified FIAT-Revelli M1914/35.
Italian company Societa Italiana Ernesto Breda, or Breda in short, delivered its first 8mm machine gun by 1937, which, like most other Italian machine guns of the time, had its own set of peculiarities. The feed system of the M37 was a variation of the old Hotchkiss-type rigid strip, with a Perino-type ejector that replaced the empty case into the strip before indexing it to the next fresh round. This would make at least some sense in a tank gun, but the Breda M37 was adopted as an infantry gun. What was even more strange was that the following year the Italian army adopted a tank version of the same weapon, known as the M38, which had an overhead detachable magazine feed system (much less convenient in a tank) with bottom ejection that required a case collector bag to be attached to the gun. The guns retained the integral oiling system, but despite this were more or less reliable in the field. In fact, the Breda M37 served as the primary medium machine gun of the Italian army throughout World War Two and for a while afterwards.

The Breda M1937 is a gas operated, air cooled weapon with a quick-change barrel of heavy profile. The long stroke gas piston is located below the barrel, and the gas system has a manual gas regulator with 10 positions. The gas piston operates a vertically sliding and reciprocating bolt (breechblock) which locks into the top of the receiver when slid up by inclined surfaces on the operating rod. Upon discharge, the initial rearward movement of the gas piston / operating rod first lowers the breechblock to unlock it, and then cycles it back and forth in usual manner before locking it up for the next discharge. Since this design provides insufficient primary extraction, an integral oiler was built into receiver top cover.
The feed is rather strange as it employs heavy rigid strips holding 20 cartridges. The feed direction is from the left side only. After each discharge, empty cases are replaced in the strip before the next round is indexed, so in the field someone has to remove the empty cases from the strips before being able to reload these. A special loading machine was provided to help with the unloading/loading of used strips.
Controls include dual spade grips with a thumb trigger in between, and a manual safety. Firing is in automatic mode only, and from an open bolt.
The standard mounting is a solid tripod with adjustable legs and traverse and elevation mechanisms, which can be adapted to AA role with use of special adaptor.