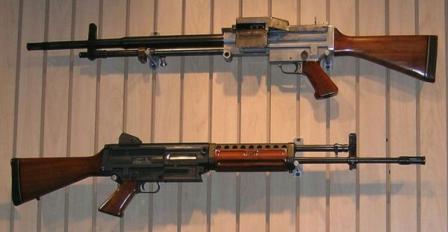 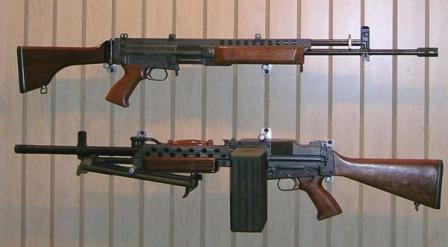 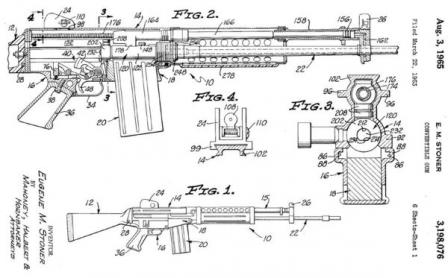 diagram from original US patent, granted to Eugene Stoner for design of Stoner62 / 63 weapon system

The Stoner 63 is a modular rifle system, invented by┬ĀEugene Stoner, one of designers of the┬ĀM16 rifle. He┬Āleft ArmaLite in about 1961 and joined the Cadillac GageCorp. There he began development of an entirely new weapon system.

It was probably the first truly modular system,┬Āconsisting of about fifteen subassemblies┬Āfor any configuration from an assault rifle and short carbine up to a lightweight or even a general purpose machine gun.

First prototypes, chambered for 7.62x51mm NATO ammunition, appeared in 1962, known as the Stoner 62. Just a year later┬Āhe┬Āturned out a new system, chambered for the┬Ā5.56×45 M193 US service round, and known as the Stoner 63. This system, developed and promoted until the early 1970’s, was extensively tested by the US military as the XM22 (Stoner 63A rifle), XM23 (Stoner 63A carbine), and the XM207 (light machine gun with belt feed).

The only military application of this system, however, was the ‘Mk.23 model 0’ belt-fed light machine gun configuration, used in limited numbers by the US Navy Special Forces and Marine Corps in Vietnam. In general the system has┬Āthe advantages of modularity and interchangeability of parts and thus great flexibility in tactical use. It’s too heavy as a rifle though, too expensive and somewhat over-complicated in general. It is also somewhat dirt-sensitive and requires much attention and maintenance.

The Stoner 63 has a stamped steel receiver containing a universal bolt group, with a multi-lug rotating bolt and long stroke gas piston with gas tube. The receiver also has several sets of mounting points for the┬Āattachment of all of the┬Āother sub-assemblies and the quick-detachable barrel. In rifle and carbine configuration, the receiver is so orientated that the gas system lies above the barrel and the feed unit mounting points are below the receiver.

In all machine gun configurations, either belt or magazine fed, the receiver is turned ŌĆ£upside downŌĆØ, with the gas system being below the barrel, and the feed unit being above the receiver. In rifle / carbine configuration the Stoner 63 system utilizes a hammer-fired trigger unit, integral with the pistol grip and trigger guard. This trigger unit allows for semi automatic┬Āand full auto fire. The gun is fired from a closed bolt only.

┬ĀOn earlier Stoner 63 weapons, the charging handle was located on the right side of the bolt carrier. The safety and fire selector were combined in one control, located on the left side of the trigger unit. On the modified 63A system, the charging handle was attached to the gas piston rod, and projected from the top in rifle / carbine configuration, or from the bottom in MG / LMG configurations.

The safety was made as a┬Āseparate lever at the front of the trigger guard, with the fire mode selector still located on the side of the trigger unit, above the pistol grip. The Stoner 63 system featured a variety of easily detachable fixed or folding buttstocks. The latter were available in a side-folding plastic variety, or in an under-folding stamped steel type, similar to the Kalashnikov AKS / AKMS.