Negev machine gun, in standard configuration and with 200-round belt container clipped to the magazine housing.
Image: IWI Ltd. 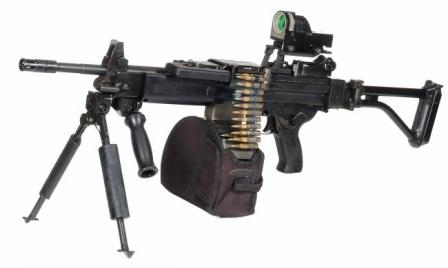 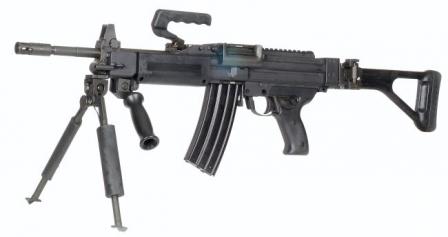 During late eighties IDF requested a development of the 5,56mm light machine gun which could complement reliable, but overly heavy 7,62mm FN MAG machine guns for foot soldiers. The goal was to design a tactical equivalent of the FN Minimi light machine gun,which was tested by IDF but for some reasons was not adopted. First prototypes of the new LMG, developed by Israeli Military Industries Company (now a privately-owned Israeli Weapons Inc) were issued to elite IDF Givati brigade in limited numbers for field testing in 1993.Those early weapons developed a lot of problems with feed reliability and high sensitivity to sand and dust, and further development took about three more years. Starting circa 1996 IMI began to deliver Negev machine guns in limited numbers, and by about 2002 it became more or less a standard issue LMG across the IDF. Negev is favored by Israeli soldiers because it is much lighter and maneuverable than venerable FNMAG, and can be easily manned by single soldier. On the other hand, itis more sensitive to sand and dust that the MAG, and requires more care and cleaning; it also lacks the range and punch of the true GPMG, therefore both 7,62mm MAG and 5,56mm Negev continue to serve in IDF side to side, which obviously is most logical solution.

Negev is a gas-operated, air-cooled light machine gun. It features quick-detachable barrels, with two barrel sizes available –Standard (long) and Commando (short).
Negev machine gun utilizes long-stroke gas piston system located below the barrel. Gas system is fitted with three-position gas regulator, with first (minimum) position used to fire when fed from magazines, second when firing from belts in normal conditions and third – when firing belts under adverse conditions. The gas regulator setting also affects the cyclic rate of fire (position #1 – lowest rate, #3 – highest). The gas piston is attached to the bolt group by dual operating rods, running at either side of receiver, to provide necessary clearance for centrally mounted magazine housing. Barrel locking is achieved by rotating the bolt with four massive radial lugs which engages the cuts in the breech of the barrel.
Firing is from open bolt, and gun provides selective fire capability through three-position manual safety-fire selector,located on the left side of the pistol grip.
Negev machine gun features dual feed system, so it can alternatively use standard disintegrating belts or detachable box magazines. Belt feed unit is installed on the top of receiver, with belt feeding direction from left to right. Belt feed is operated by the side-mounted swinging lever,which is operated by cam track cut in the side of the bolt carrier(system somewhat similar to that used in post-WW2 Czechoslovak machine guns). Magazine housing is located below the receiver, with magazine being inserted vertically up. Ejection window for empty cases is at theright side of receiver, just below the empty link ejection window. By default, magazine housing will accept proprietary box magazines originally designed for 5,56mm Galil assault rifle,with 35-round capacity. An adapter can be installed in magazine housing to use STANAG-compatible (M16-type) 30-round magazines. Belts are usually fed from semi-rigid “assault pouches” with 150- or 200-round capacity. These pouches are clipped to machine gun below the receiver, using special projection at the top which is inserted into magazine housing and locked there using magazine catch. Early pouches were of circular (drum) shape, but later these were replaced with more rigid and reliable pouches of semi-circular shape. When not in use,magazine housing is protected by spring-loaded dust-covers.
Standard furniture includes polymer pistol grip, polymer handguard, and a side-folding Galil-type skeletonized buttstock. A lightweight detachable folding bipod is attached to the gas tube. It is interesting to note that when fitted with short (Commando) barrel and box magazine, and with bipod removed,Negev represents a formidable assault rifle, although it is somewhat heavy by rifle standards. It can be used as an effective CQB weapon,providing high maneuverability in confined spaces, with added benefit of serious firepower, thanks to its relatively heavy and quick-changeable barrel.