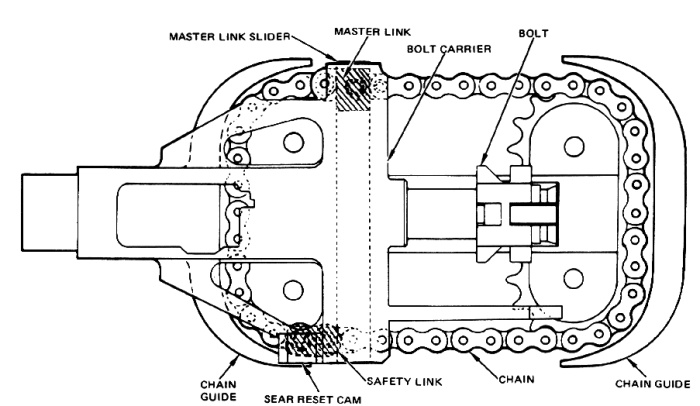 diagram of the chain-driven action, from Hughes Co patent

Following failure of the 7.62mm M73 tank machine guns, in around 1970 US Army decided to try some unorthodox solutions for a compact yet simple and reliable tank machine gun in the form of an externally powered weapon. An additional benefit of an external power solution is that such weapon, if properly timed, will not leak powder gases back into the tank interior. Initial work was commenced by the Hughes Tool Co, under contract to the US Army Weapons Command. The test weapon, unofficially known as EPAM (Externally Powered Armor Machine gun) used a 24VAC electric motor, which operated dual belt feeds and a rotating cylinder with cam slot that operated the reciprocating bolt. The test weapon fired at about 550 round per minute, and had forward ejection through a long tube, so spent cases would fall outside the tank interior. For various reasons, however, this system was abandoned in favor of the so called “Chain Gun” system, developed by the same Hughes Tool Co in around 1973. The basic principle involved an externally driven endless chain that ran around the receiver and operated a more or less traditional rotating bolt and bolt carrier through a single abutment, fixed to the chain. This principle was used to develop a wide array of weapons, including a 30mm helicopter gun for the AH64 Apache helicopter, several automatic cannon of the “Bushmaster” family, and one 7.62mm machine gun, the EX34. Despite the fact that “Chain Gun” automatic cannon found wide acceptance in US Service and abroad, the “smaller brother” of the family found no luck in the US Armed forces; however, it was adopted as a vehicle gun in UK and Canada and is manufactured under license by Colt Canada (former DIEMACO) in Canada. Also, in 2011 US-based ATK Corporation announced its newest addition to the “Bushmaster” family of externally operated weapons, the “Bushmaster 7,62mm” tank machine gun. This weapon appears to be modified and slightly shortened and lightened version of the old “7,62mm Chain gun”.

The 7.62mm EX34 / L94A1 "Chain gun" / “Bushmaster 7,62mm” weapon is an air cooled, belt feed, externally powered machine gun. It derives its name from the endless metallic chain that runs the perimeter of its compact receiver. Chain is driven by the 24-28 Volt electric motor. A single shoe is attached to the chain, which runs circles at the bottom of receiver, operating the reciprocating bolt group with rotary bolt. Operating shoe engages the horizontal cut, which runs perpendicular to the barrel axis on the underside of the bolt carrier. When operating shoe moves forward along one side of the receiver, it pushes the bolt group forward, chambering the next round and then closing and locking the breech. As soon as breech is locked, firing pin is released to fire the cartridge. At this time the operating shoe, along with its chain, changes its direction and moves across the receiver toward its opposite side, sliding in the cut in bolt carrier. During this period of operating cycle bolt group remains stationary and locked, providing necessary dwell time for discharge to be completed and pressure in the barrel to be released after the bullet. As soon as the operating shoe finishes its way across the receiver and starts back along with the chain, it pulls the bolt carrier back, unlocking the bolt and then extracting and ejecting the fired cartridge case (or misfired cartridge, in the rare case of misfire or dud cartridge). This system provides safe and reliable operation, which does not depend upon the discharge of the cartridge to continue the cycle, and which also minimizes the stress from moving parts, as bolt group always moves at controlled speed and with limited acceleration. Another bonus of this system is that it results in a short receiver, which is a bonus for tank and vehicle weapons.

Barrel is detachable and may be easily replaced if worn or overheated.

Feed is from standard disintegrating-link belt, adjustable to either side. Feed unit is operated by the same electric motor and carefully synchronized to the action. Firing is from open bolt. Empty cases are ejected forward.

By default, there are no firing controls other than electric interface. Electric power is provided from the host platform.

In heliborne applications the EX34 is fitted with short barrel jacket; in tank / coaxial versions, the slotted barrel jacket runs for entire length of the barrel.

Bushmaster 7,62mm: most recent product of the ATK Corporation. It is lighter and shorter than previous models, and also has some reliability improvements