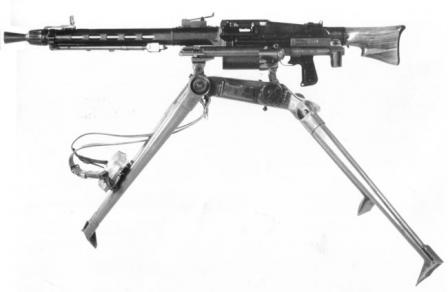 In around 1942 the Swiss army initiated a competition for a new service machine gun to replace both the “heavy” MG 11 and the “light” Lmg25, adopted in 1911 and 1925 respectively. Three participants joined the competition – government-owned Waffenfabrik Bern, and privately owned factories SIG and Hispano-Suiza.
Waffenfabrik Bern based its development on the very successful German MG42. The first prototypes emerged in around 1944, and looked much like MG42, although the shape of receiver and butt was somewhat different. The final design, which appeared in 1950, was in most respects similar to the MG 42, although many parts were produced by machining instead of stamping, and the locking system was changed from roller to flap locking. The resulting weapon was heavier than the German original, and much more finely made and finished. In certain respects it was a “Rolex” of machine guns.
Until very recently MG 51 served as a primary infantry and vehicle machine gun for Swiss army, although it is now being gradually replaced in service with lighter and less expensive, but also less powerful 5,56mm FNMinimi machine gun of Belgian origin and manufacture.

The MG 51 is a short-recoil operated, locked breech, air-cooled and automatic only, belt-fed weapon. It uses a modified MG 42 type locking system with a two-piece bolt and dual locking flaps located in the front part of the bolt. These flaps engage the cuts made in the short barrel extension to provide rigid locking. Upon recoil, the flaps are retracted toward the center of the bolt, to unlock it. An additional lever-type bolt accelerator is provided; it is located in receiver, next to the barrel breech and below the bolt. The gun housing also somewhat resembles the German MG 42, although it is made from two separate parts – the barrel jacket (made from stamped steel) and receiver (a solid machined body). The barrel jacket is permanently welded to the front of the receiver. The barrel can be changed rapidly if required; the barrel change procedure is similar to that of the MG 42, with the locking latch located at the right side of the jacket, which is opened to provide a barrel replacement window.
The belt feed system is also similar to the MG 42, with single-stage cartridge feed that uses open-pocket steel belts (push-through type) and a two-stage belt pull (on both the opening and closing movement of the bolt). Feed is from the left side. For the mobile role, 50-round belts can be loaded into drum-type containers, which are clipped to the side of the gun.
Standard sights are of the open type, but telescopic or night sight can be fitted to the gun if necessary.A folding bipod is fitted; for sustained or long range fire missions a universal tripod is provided.Early production guns had wooden pistol grips and buttstocks; more modern guns have polymer furniture.