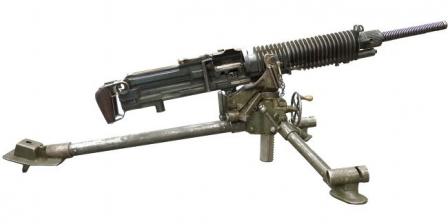 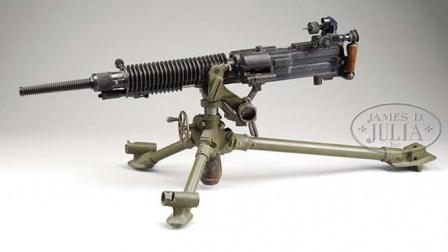 The Type 3 Taisho Heavy Machine Gun was the first domestically designed Japanese machine gun, first produced in 1914. It was somewhat similar to the French Hotchkiss medium machine gun, although General Kijiro Nambu, the designer of the gun, made numerous changes to the feed, fire controls and locking system of the weapon.

During the late 1920’s and early 1930’s the Imperial Japanese Army decided to improve the lethality and effectiveness of its machine guns by adopting a more powerful cartridge to complement the only mildly powerful 6.5x50SR Arisaka ammunition then in general use.

In 1932 the IJA adopted the 7.7x58SR Type 92 cartridge and the Type 92 Medium Machine Gun to fire it. The ammunition was a semi-rimmed version of the British .303 round (7.7x56R), and the gun was really only a slight modification of the Type 3 machine gun. The new round obviously increased the capabilities of the Japanese’ range of infantry machine guns, but it also made Army logistics more complex.

The Type 92 machine gun (known among US soldiers and Marines in the Pacific war as the “woodpecker” for its peculiar slow-rate firing sound) was the main medium machine gun of the Japanese army throughout WW2.

The Type 3 machine gun is a gas operated, air cooled, automatic-only machine gun. The barrel of the gun is finned in its front part (ahead of the gas port). Barrel replacement requires the use of a special wrench and cannot easily be done in combat. The rear part of the barrel is enclosed within a massive barrel jacket with large radial fins. This jacket is permanently attached to the receiver and carries provision for mounting the gun to the tripod or other mount.

The basic action employs a long-stroke gas piston, located below the barrel. The gas system is provided with a manual gas regulator. The gas piston operates the strip feed (through a cam cut in its operating rod) and the bolt group, through a projection with inclined surfaces on the rear of the operating rod. The bolt only has a linear motion and bolt locking is provided by a separate wedge-shaped lock. This lock is connected to the rear of the bolt and permitted to slide up and down. It also has two locking lugs (one on either side) which engage locking recesses in the receiver walls.

To lock the bolt, the lock is lowered by the interaction with the inclined surfaces on the hook-shaped projection of the operating rod. To unlock the bolt after each discharge, it is lifted by a cam surface on the operating rod during the early rearward movement of the gas piston / operating rod. The locking wedge has a channel in the center for the firing pin, which is operated by the projection on the operating bolt once the bolt group is fully in battery and locked. The shape of this channel prevents forward movement of the firing pin unless the lock is fully seated in the receiver and thus the bolt is safely locked. Firing is from an open bolt, in automatic mode only.

Firing controls on the Type 3 include dual spade grips with interlinked dual triggers. No manual safety is provided. The Type 92 machine gun featured an updated fire control group including folding horizontal grips with a single thumb-trigger in between, and the addition of a manual safety.

The ammunition feed is via Hotchkiss-type rigid metal strips and the  direction of the feed is from left to right only. Since the gun mechanism provides no primary extraction, an integral oiler is built into the feed unit. Each cartridge in the strip passes below a brush built into the top feed cover. When the cartridge is drawn across the feed, it pushes the oiler valve and a small amount of oil is squirted into the brush and then transferred to the cartridge before it reaches the chamber.

The standard mounting is a solid infantry-type tripod with traverse and elevation mechanisms. The tripod can be adapted for the AA role with the introduction of a special adapter rod. The tripod is unusual in that it has provision for the attachment of carrying poles at the two front legs and a special carrying fork at the rear leg. That way, the gun on its mount can be carried across the field by two or more soldiers, in the same way as they would carry a stretcher.