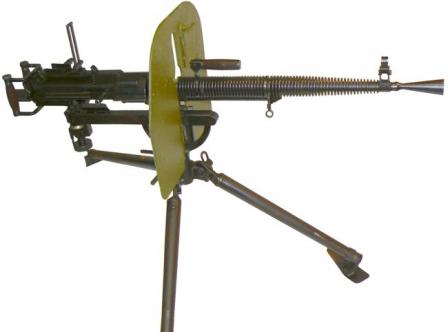 Not much known are the continuous efforts by Soviet designer Degtyarov to build a universal machine gun based on his DP-27 light machine gun action, in accordance with the concepts developed during the previous decade by himself and his teacher Fedorov. Work on the DU (Degtyarov Universalnyj – Degtyarov Universal) series of machine guns commenced in 1928 following a request from ArtKom (the Artillery Committee of the Red Army), and the first working prototypes had appeared by 1930. These included various air-cooled (with ribbed barrels or forced air cooling a-la Lewis) LMG and MMG versions with various feed options, including box or flat pan magazines and belt feed.
Following much development, these eventually evolved into the DS-39 air-cooled, belt-fed, tripod-mounted medium machine gun, which was officially adopted in 1939 with intention of replacing the ageing Maxim M1910/30 MMGs. The DS-39 entered full-scale production in 1940, and at the same time production of Maxim guns was reduced, pending its complete termination in the coming year or two. However, this did not happen, as Hitler’s invasion of the USSR not only seriously impaired Soviet production capabilities, but also revealed serious flaws in the DS-39 design. Apparently, these flaws were not detected during previous trials, and only the extensive use of these new MG’s in real combat showed that they were unreliable and prone to serious malfunctions and jams (the most common and frequent being torn empty cases, and bullet separation when pulling rounds with heavy bullets from the belt). The first year of the Great Patriotic War is often described in Russian literature as the “machine gun drama”, as 10,000 of the DS-39 were found to be unsatisfactory and the arms factories (then in the process of relocating further east) were unable either to refine this design or to resume production of Maxim guns at a necessary highrate. As a result, production of the DS-39 was stopped in 1941, in favour of thetime-proven Maxim M1910/30. Degtyarov for a whilecontinued development of his machine gun, but in 1942 his latest prototype, theDS-42, has lost trials to the Gorynov machine gun.

The DS-39 was a gas operated, air cooled, belt fed, automatic only, weapon. The gas chamber was located below the barrel, and the gas piston was rigidly attached to the bolt carrier (a long piston stroke gas system). The locking was achieved by two flaps, which were forced outwards from the bolt body to lock into recesses in the inner receiver walls at either side of the bolt. The gun fired from an open bolt, and the locking flaps were pushed outwards by the firing pin, which in turn was pushed forward by the projection on the bolt carrier. The gas system was fitted with a manual gas regulator. The charging handle was permanently attached to the right side of the bolt carrier. The rear part of the receiver hosted an additional spring buffer, which could be brought into action with the switch of a lever to speed up the recoil cycle and therefore almost double the cyclic rate of fire (for AA applications).
The DS-39 used a two-stage feed from a non-disintegrating steel belt with closed links. Upon the opening stroke of the bolt group the fresh cartridge was withdrawn from the belt to the rear and put into the feedway, then, on the closing stroke of the bolt, it was chambered and fired. This system was one of the two weakest points in the design, as a violent rearward movement of the cartridges, loaded with heavy bullets, often resulted in bullet separation. Another source of problems was the violent opening of the bolt combined with the lack of primary extraction, which resulted in torn cartridge cases. Therefore, the DS-39 was approved only for use with steel-cased ammunition; brass-cased ammunition was prohibited as this stood more chance of problems.
The standard mount was a folding tripod with adjustable height and optional steel shield, designed by Degtyarov. This mount was intended for ground applications only.