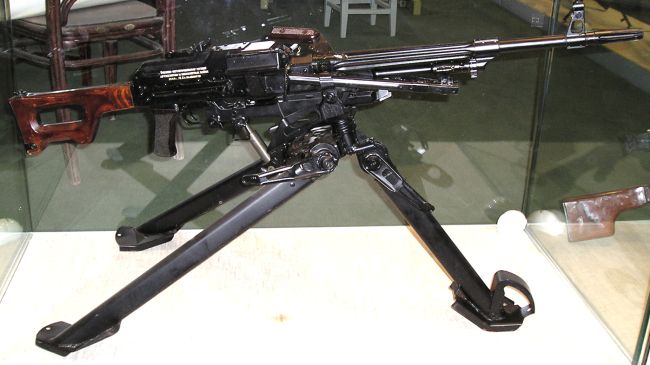 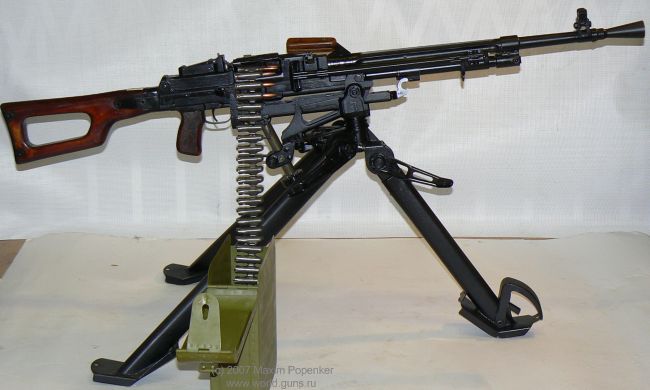 The 7,62x54R Nikitin PN machine gun –  from a pre-production batch made in 1960 for final troop trials. This gun was almost adopted by the Soviet army but then mysteriously lost during final trials, to the Kalashnikov PK. 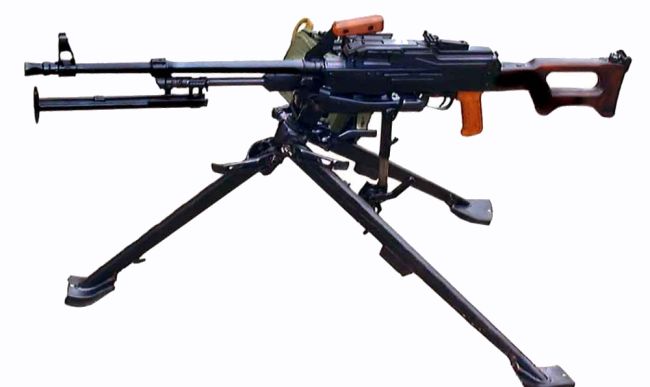 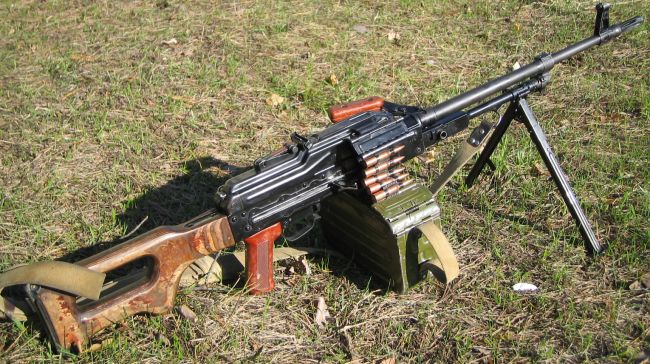 Like many others, Soviet military experts closely examined the German ‘heritage’ of WW2, and like many, they found the idea of a Universal (or General Purpose) MG to be very appealing, especially from the logistical and economic point of view. It was therefore decided to replace all the differing company, battalion and tank MG’s with a single universal design, adaptable to any of those roles. By the early 1950’s, requirements were fixed for a new GPMG, firing 7.62x54R ammunition from belts and capable of firing from an integral bipod, an infantry tripod mount or a vehicle mount. After many false starts, by 1956-7 one new design became a favorite, the newly developed Nikitin GPMG. This was a gas operated, air cooled, belt fed weapon with a quick-detachable barrel. It used a fairly typical rotating bolt locking system along with less typical (at least, for Soviet guns of the period) features, such as a self-regulating gas system and push-through feed operation with open-pocket steel belts (incompatible with earlier Maxim and SG-43/SGM belts). By 1958, the Nikitin design was already recommended for adoption, and a batch of 500 guns were ordered for extended field trials with troops, but the situation then became surprisingly complicated. For some reason, the General artillery department of the Soviet Army decided to spur the somewhat slow development of the Nikitin  GPMG, and ordered Mikhail Kalashnikov to build his own machine gun to compete with the already established design. At the time Kalashnikov was busy finalizing his improved AKM assault rifle and its companion machine rifle which later became the RPK. However, he accepted the challenge and put some men of his team onto the task of creating their own universal machine gun. It must be noted that this strange situation resulted in a clash of interests between GAU (who literally placed its bet on a new Kalashnikov design) and some elements of the Army and Soviet Ministry of Defense Industry, who put their stakes (including their future careers) on the Nikitin design. Exact details of this “undercover battle” are unknown to the general public. The result though, is widely publicized – the Kalashnikov design won the trials and was subsequently adopted in 1961 as the PK (Pulemet Kalashnikova). It also must be noted that while the PK turned out to be an excellent weapon, people who tested the PN actually often thought that it was superior.

The PK is a gas operated, belt fed, air cooled, automatic only, machine gun. It fires from an open bolt and has a quick detachable barrel. The gas system consists of a gas chamber with a manual gas regulator, and a long stroke gas piston located below the barrel. Locking is achieved through a rotating bolt with dual locking lugs. The PK utilises a two-stage belt feed from steel non-disintegrating belts. Upon the opening stroke of the bolt group, a special claw-shaped ejector withdraws the cartridge back from the belt, and a spring-loaded arm then lowers it into the feed way. Upon the closing stroke of the bolt group, the feed lug on the bolt pushes the cartridge into the chamber. Ammunition feed is from the right side only. Spent cases are ejected to the left through a special window in the receiver; this has a spring-loaded dust cover which opens and closes automatically during each reloading cycle. Loading and ejection windows in the feed unit also have dust covers. The feed unit cover is hinged at the front and can be lifted up for loading, unloading or inspection. Standard belts have a capacity of 100 (for PK) or 200 and 250 (for PKS) rounds. Belts are fed from special steel boxes, and a 100-round box can be clamped under the receiver of the PK for better mobility.

The PK is fitted with a skeleton buttstock made from wood and fitted with a hinged buttplate, and a wooden or plastic pistol grip. The rear part of the buttstock houses an accessory / cleaning kit, and a disassembled cleaning rod is stored in the right leg of the bipod. A folding bipod is fitted to the gas tube below the barrel. Each PK gun has a mounting interface which allows it to be placed into the cradle of a universal tripod, designed by Samozhenkov, to form the PKS medium machine gun. This tripod has traverse and elevation mechanisms, and has an adapter for AA use.

Standard sights are of the open type, with a hooded post front and tangent-type rear sight, marked for ranges of up to 1500 metres and with a windage adjustment mechanism. Special versions of the PK have a receiver rail, which accepts mountings of various night sights. Such versions are designated PKN or PKSN, depending on the tactical role.

Modifications.
PKM / PKMS (Modified) is a lightened version of the basic design. The barrel is not fluted, and has a different style of shorter flash hider. The feed cover is strengthened by the introduction of stamped ribs. The Samozhenkov tripod is replaced by a new, lightweight tripod designed by Stepanov. This tripod has a special mount for the belt box, so a mounted PKMS gun can be moved through the battlefield without the need for unloading before movement and subsequent loading in a new position.

PKT (Tank) is a coaxial weapon used on most Soviet and Russian main battle tanks. It has a heavier, non-fluted barrel. The barrel is also longer than on the PK to provide ballistics similar to that of the earlier SGMT weapon it replaced (to avoid replacement of the expensive tank sights). The gas block is modified and the stock, bipod and pistol grip are discarded. The firing solenoid is attached to the rear of the receiver, but the PKT also retains an emergency mechanical (manual) trigger.

PKB (for armored cars) is the same as the PK but installed on a special mount. However, there were special versions of the PKB fitted with dual spade grips instead of the pistol grip and shoulder stock. Such versions also were used on Mi-8 Hip transport and Mi-24 Hind attack helicopters in window and door mounts throughout the Afghanistan campaign of the Soviet army.