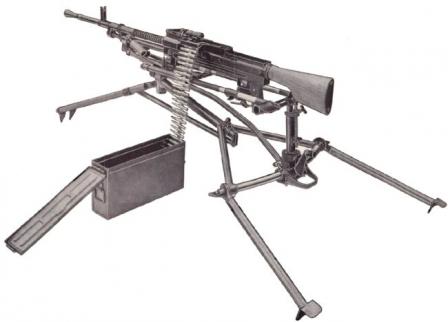 With the demise of the original Madsen light machine gunin the early 1950s, DISA began to look for a more modern weapon in the same general class, and eventually found a design by Eric Larsen-Saetter. This was a more or less conventional weapon of its time – a belt-fed universal machine gun. However, it was ready for production too late to win any significant portion of the market (design patents were applied for in 1952, but the final pattern of the gun was developed only in around 1960), which was already occupied by strong contenders such as the Belgian FN MAG 58, the German MG 42/59 and the American M60. The only customer for the new Madsen-Saetter GPMG was Indonesia, which also obtained a manufacturinglicense and produced these guns for domestic use at the Pindad factory. A brief attempt was made during the early 1960s to produce a 12.7mm heavy machine gun based on the same Saetter design, but it never wentinto mass production.

The Madsen-Saetter universal machine gun is a gas operated, air-cooled, belt-fed automatic weapon which fires from an open bolt. The barrel is quick-removable.
The Madsen-Saetter GPMG utilizes the long-stroke gas system with the gas piston located below the barrel. The gas block is fitted with a manual gas regulator that permits adjustments for various conditions and rates of fire. Locking is achieved by two lateral flaps, installed in the bolt and forced outwards and into locking recesses in the receiver walls by the firing pin – a system, basically similar to that of Russian Degtyarov machine guns, with minor detailed improvements. The gun fires from open bolt, in automatic mode only.
The feed uses non-disintegrating steel belts with open pockets. Each belt consists of 50-round pieces that can be assembled together using a cartridge as an interlink to provide a bigger capacity. The feed is of the push-through type, with a mechanism basically similar to that of the German MG 42.The gun is fitted with a wooden shoulder stock, a pistol grip and a folding bipod. DISA also produced a series of tripod mountings for this gun.