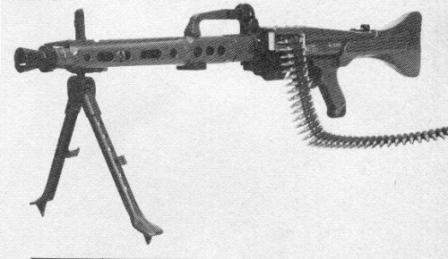 The Ameli machine gun had been developed by CETME (now Empresa Nacional SANTA BARBARA) company of Spain in 1982, and is in use with Spanish army and some other forces.

The Ameli, while being externally similar to the german MG3, internally much closer to CETME Mod. L asault rifle (or Heckler & Koch HK-21 machine gun), having similar, roller delayed blowback action. Some parts are intechangeable between CETME L rifle and Ameli. Ameli is fired from the open bolt. The barrel is quick changeable. The Ameli is fed from disposable plastic boxes that can contain 100 or 200 rounds in belt. The cyclic rate of fire (ROF) can be ajusted with interchangeable bolts, much like the MG3; with the lighter bolt the ROF is about 1200 rounds per minute; with the heavier bolt the ROF is about 850-900 rounds per minute.